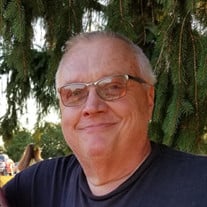 Lee Jackson Silar, 65, died on Monday, October 19, 2020 at Wellspan York Hospital. He was the husband of Deborah Kay (Young) Silar, sharing 47 years of marriage. Lee was born in Columbia, PA on October 29, 1954, son of the late Robert Jackson Silar and Sally A. (Berkheiser) Perry. Lee graduated from York Vo-Tech. He retired from PA Sling Company and also worked at South Mountain Dragway. Lee was a member of the Pleasureville American Legion, Post 799 and several car clubs including, Blue Moon Cruisers and Motor Menders. He loved motorcycles and tinkering with small motors and anything else he could get his hands on. Lee also enjoyed camping and spending time with his grandchildren. In addition to his wife, Lee is survived by three grandchildren, Ethan Silar, Brooklyn Cochran, and Khloe Cochran; two brothers, Bruce Silar and his wife, Cynthia and Neal Silar and his wife, Min Fong; and several nieces and nephews. He was preceded in death by his daughter, Erin Leigh Silar. Services will be private at the convenience of the family. In lieu of flowers, memorial contributions may be made to the National Pancreatic Cancer Foundation, P.O. Box 1848, Longmont, CO 80502. Arrangements by the Etzweiler Funeral Homes and Cremation Service, 1111 E. Market St. York, PA 17403.

The family of Lee Jackson Silar created this Life Tributes page to make it easy to share your memories.

Send flowers to the Silar family.