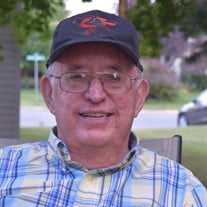 Lawrence Franklin Appleby, died on January 12, 2021, of cancer at York Hospital. He was born on August 16, 1933 in Huntington County in PA. His parents were Reuben Elsworth Appleby and Mabel Irene (Stahl). Larry was preceded in death by his brothers, Reuben and James, and a son, Quinn. His survivors are his wife of 66 years, Gale L. (Grove), daughter, Debra Why, son, Michael Appleby and his wife LeAnne. He had five grandchildren – Rachel Why (Michael Trone), Timothy Why (Valerie), Matthew Appleby (Cassie), Aaron Why (Jennefer), and Benjamin Appleby. He also had 12 great-grandchildren. He graduated from Highspire High School in 1951 where he played football. Larry served in the Marine Corp during the Korean War. He retired from the composing room of the York Daily Record in 1998. He was an active member of Fourth United Methodist Church. He served on the Board of Trustees for a long time and also taught Sunday School. He was a Boy Scout and was involved in Scouting for many years at the church. He received the Order of the Arrow. Larry was always a fan of the Baltimore Orioles and a member of the Victory Club. A memorial service will be held Wednesday, January 20, 2021 at 11:00 a.m. at Fourth United Methodist Church, 1067 East Market Street, York with his pastor, the Rev. Matthew Loyer, officiating. The service will be available for viewing following the service on Larry’s tribute page at www.etzweilerfuneralhome.com. A visitation will be held Wednesday from 10:00-11:00 a.m. at the church. If attending, please wear a mask and observe social distancing. In lieu of flowers, donations made be sent to Fourth United Methodist Church, 20 North Lehman Street, York, PA 17403. Arrangements by the Etzweiler Funeral Homes and Cremation Service, 1111 E. Market St. York, PA 17403.

Lawrence Franklin Appleby, died on January 12, 2021, of cancer at York Hospital. He was born on August 16, 1933 in Huntington County in PA. His parents were Reuben Elsworth Appleby and Mabel Irene (Stahl). Larry was preceded in death by his... View Obituary & Service Information

The family of Lawrence Franklin Appleby created this Life Tributes page to make it easy to share your memories.

Send flowers to the Appleby family.