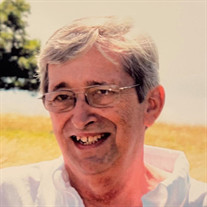 Larry J. Willis, Sr., 76, of York, PA, died at his residence on April 12, 2021. He was the husband of Judy M. (Schrom) Willis with whom he observed their 53rd wedding anniversary on June 16, 2020. Born December 13, 1944 in York, PA, he was the son of the late Edith (Kottcamp) and George Willis, Sr. Larry was employed as an electrician for I.B.E.W. Local 229 of York, PA, and was a member for 54 years. He was a 1963 graduate of William Penn Senior High School and a member of St. Paul’s United Methodist Church in York. Larry was an avid David Bradley Tractor and accessories collector and could often be seen at auctions seeking them out. In addition to his wife, Larry is survived by a son, Larry J. Willis, Jr. and his wife, Dena R. of York, PA; two grandchildren, Monica Lyn Willis of York, PA and Brandon Michael Willis of Philadelphia, PA; two great grandchildren, Isaiah J. Mayo and Aaliyah Rose Davis; two brothers, Phil Willis of Dallastown, PA and Randy Willis of Dagsboro, DE and a sister, Joyce Eckenrode of York, PA. In addition to his parents, Larry was also preceded in death by two brothers, George Willis, Jr. and Conrad Willis. A funeral service will be held at 11:00 a.m. Monday April 19, 2021 at the Etzweiler Funeral Home, 1111 E. Market St., York, PA with Pastor Donald K. Alspaugh, officiating. A viewing will be held from 10:00-11:00 a.m. Monday at the funeral home. Burial will be in Prospect Hill Cemetery. In lieu of flowers, memorial contributions may be made to Memorial White Rose Hospice, 1412 Sixth Avenue, York, PA 17403. Arrangements by the Etzweiler Funeral Homes and Cremation Service, 1111 E. Market St. York, PA 17403.

The family of Larry J. Willis Sr. created this Life Tributes page to make it easy to share your memories.

Send flowers to the Willis family.