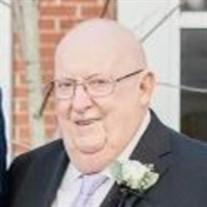 Kenneth J. Stoner, 89, of Wrightsville passed away Saturday, January 2, 2021 at Kadima Health Care in Lititz. He was the husband of Shirley T. (Evans) Stoner. Ken and Shirley celebrated their 67th wedding anniversary on November 26, 2020. Born November 3, 1931 in Columbia, he was the son of the late Henry K. and Mary E. (Hevner) Stoner. Ken was a 1949 graduate of Wrightsville High School. He received his bachelor’s degree in biological science in 1953 from Millersville State Teacher’s College where he lettered in both baseball and basketball. Following his graduation, he was a teacher and basketball and baseball coach in Greencastle-Antrim School District for a year before being drafted into the U.S. Army. After serving in the Army, he returned to Wrightsville and taught at Eastern York High School and coached basketball for over 25 years. Ken had over 300 wins in his basketball coaching career. He also served as a basketball and baseball PIAA official from 1953-1996. Ken was inducted into the Millersville Hall of Fame for both baseball and basketball and was also a member of the Susquehanna Valley Pennsylvania Sports Hall of Fame. When Ken was not teaching or coaching, he worked as a mail carrier and in the post office at the Wrightsville Borough Post Office for 38 years. He also operated the scoreboard at Eastern’s sporting events for many years. Ken was a member of Trinity Lutheran Church in Wrightsville where he served on the church council. He was involved in numerous organizations such as the Wrightsville Rotary Club (now Rotary Club of Eastern York County) where he served as President and Vice-President, Historic Wrightsville, Inc. where he was a past President, Wrightsville Municipal Authority, the Kreutz Creek Valley VFW Post 7045, and the Abel-Poff-Leithiser American Legion Post 469. Ken was a member and Past Master of Riverside Lodge No. 503, F. & A.M., life member of York Forest #30, Tall Cedars of Lebanon and member of Harrisburg Consistory, Zembo Temple and the York County Shrine Club. Ken was also a member of the Par Shooters at Cool Creek Golf Course where he also helped as a Starter. He played baseball in the Twilight and Susquehanna Leagues. Ken touched a lot of people’s lives through his teaching, coaching, and public service. He led by the Rotary motto “Service above Self”. In addition to his wife, Ken is survived by his son, Dave and his wife, Linda Stoner of Red Lion; daughter, Deb and her husband, Brian Miller of Ellicott City, MD; 4 grandchildren, Angela Cordell, Jennifer Lane, Brad Miller, and Tommy Miller; 5 great grandchildren, Zane, Ryan, and Tyler Cordell, Madison Lane, and James Lane IV; and a nephew, Henry A. and his wife, Beverly Stoner of York. He was preceded in death by a sister, Dorothy Stoner and a brother, Henry A. Stoner, Jr. Due to COVID, services will be held for the family only on Thursday, January 7, 2021 at the Etzweiler Funeral Home, Inc, Wrightsville. Burial will be in Fairview Cemetery. Ken’s lodge will provide masonic services at the funeral home and the York County Veteran’s Honor Guard will conduct a flag folding ceremony at the cemetery. The funeral service will be available to view following the service on Thursday on Ken’s tribute page on the funeral home website at www.etzweilerfuneralhome. A Celebration of Life service will be held at a later date. In lieu of flowers, memorial contributions may be made to Trinity Lutheran Church, 243 Hellam Street, Wrightsville, PA 17368, or to Rotary Club of Eastern York County, P.O. Box 321, Wrightsville, PA 17368, or to Historic Wrightsville, Inc., 309 Locust Street, Wrightsville, PA 17368. Arrangements by the Etzweiler Funeral Homes and Cremation Service, 700 Hellam Street, Wrightsville, PA 17368.

The family of Kenneth J. Stoner created this Life Tributes page to make it easy to share your memories.

Send flowers to the Stoner family.