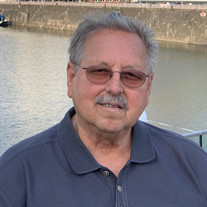 Kenneth C. Haugh, 76, of Wrightsville, died peacefully after a brief illness at the Lancaster General Hospital on Wednesday, December 23, 2020. Born in Hellam Township on September 9, 1944, he was the son of the late William M. and Grace I. (Hinkle) Haugh. Ken was the husband of Deborah A. (Adams) Haugh. Ken was a graduate of Eastern York High School. He worked in the foundry industry his entire life and created H&H Casting in a small building located in Wrightsville. The company is now located outside of Hellam and he contributed the success of the business to the hard work of his family and employees. Ken enjoyed traveling, collecting cars, and golfing. He also enjoyed his morning routine of meeting his friends for breakfast at the Rivertown Restaurant (formerly Phil’s). Ken loved to spend time with his family and friends, especially over a great meal. In addition to his wife, Ken is survived by his daughters, Lynne Haugh, Abby Meissner, and Tisha and her husband, Jason O’Donnell; his stepsons, Patrick and his wife, Melissa Duncan, Brian Duncan all from York, Kevin Duncan of Phoenix AZ, and Mark Duncan of York. He is also survived by his brothers, William Haugh and his wife, Roxanne and Rodney Haugh with his wife, Kathleen of York. He had twelve beloved grandchildren and two beloved great-grandchildren. Ken was preceded in death by his daughter, Amy Cummins and his sister, Sandra Engelstad. Due to current health restrictions, no services for Ken will be held at this time. Contributions in Ken‘s memory may be made to the American Cancer Society, 314 Good Drive, Lancaster, PA 17603. Arrangements by the Etzweiler Funeral Homes and Cremation Service, 700 Hellam Street, Wrightsville, PA 17368.

Kenneth C. Haugh, 76, of Wrightsville, died peacefully after a brief illness at the Lancaster General Hospital on Wednesday, December 23, 2020. Born in Hellam Township on September 9, 1944, he was the son of the late William M. and Grace I.... View Obituary & Service Information

The family of Kenneth C. Haugh created this Life Tributes page to make it easy to share your memories.

Send flowers to the Haugh family.