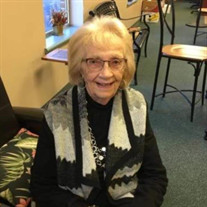 Judith M. Smith, 90, of York died Wednesday, January 20, 2021 at her home. She was the wife of the late Donald E. Smith. Mr. and Mrs. Smith were married for 48 years prior to his death in 2001. Born August 15, 1930 in Baltimore, MD, she was the daughter of the late John O. and Goldie E. (Oberlander) Rodgers. Judy moved to Dover where she lived on the family farm. Judy was a 1948 graduate of Dover Area High School. She attended Thompson School of Business which led her to being a secretary at WSBA for 45 years. She was a member of Calvary Lutheran Church in Dover and attended Stillmeadow Church of the Nazarene. Judy enjoyed shopping, collecting teddy bears, traveling with Donald to many different places especially to Myrtle Beach, spending time with her grandchildren, and reminiscing about childhood memories. Judy is survived by her son, Gregory A. Smith and his wife, Cathy of York; 3 granddaughters, Jennifer Melder and her husband, Scott of York, Lisa Schade and her fiancé, Rhett Hefelfinger of Dover, and Laura Harleman and her fiancé, Michael Runkle, Sr. of Dover; 6 great grandchildren; a brother, William Rodgers of Dover, and numerous nieces and nephews. She was preceded in death by a brother, John J. Rodgers. Graveside services will be held Wednesday, January 27, 2021 at 11:00 a.m. at Prospect Hill Cemetery, 700 North George Street, York with Pastor Kent Vandervort officiating. Family and friends should meet at the Pennsylvania Avenue entrance of the cemetery at 10:45 a.m. on Wednesday. For those unable to attend, the service will be available following the service on Judy’s tribute page at www.etzweilerfuneralhome.com. Arrangements by the Etzweiler Funeral Homes and Cremation Service, 1111 E. Market St., York, PA 17403.

The family of Judith M. Smith created this Life Tributes page to make it easy to share your memories.