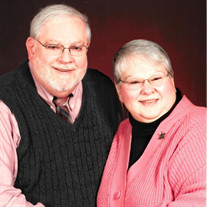 Not sure what to send?

Judith H. Landis and Roger K. Landis died on December 13, and December 20, 2021. Judith was born in Philadelphia on July 13, 1948. She was the daughter of the late Frank H. “Howard” and Eleanore E. “Betty” (MacMoran) Hunsworth. Roger was born in York on May 30, 1947, and was the son of the late Donald F. and Ethel A. (Rumbaugh) Landis. Judith was a 1966 graduate of York Suburban High School, a 1968 graduate of York Junior College, and worked as a teacher’s aide for Central York School District. Roger graduated from West York Area High Schol in 1965 and received a B.S. degree from Millersville University in 1969. Roger worked as a chemist for Armstrong World Industries for many years. After his retirement, Roger went on to enjoy a second career as the office and business manager for First Presbyterian Church of York. Both Roger and Judy were active and involved members of the First Presbyterian Church of York. Both sang in the chancel and cantata choirs and served on various committees. Judith also served as a volunteer for the Caring Ministry and led a Bible study in her home. Roger and Judy are survived by their two children: Jennifer Ryan and her husband, Timothy, of York, and Christopher Landis and his wife, Amy (Guard), of Frederick, MD. In addition to their children, they are also survived by five grandchildren: Joshua, Elissa and Daniel Ryan, and Grayson and Benjamin Landis. Roger is survived by a sister, Carol Winter, and her husband Harold G., II of Pittsburgh. A combined celebration of life service will be held on Saturday, January 22, 2022 at 3:00 pm at the First Presbyterian Church of York, 225 East Market Street, York. In lieu of flowers, memorial contributions may be made to the Caring Ministry at First Presbyterian Church of York. Arrangements by the Etzweiler Funeral Homes and Cremation Service, 1111 East Market Street, York, PA 17403.

The family of Judith H. Landis created this Life Tributes page to make it easy to share your memories.