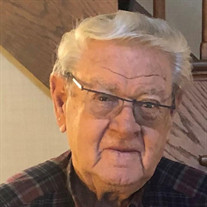 Joseph A. Altland, 88, died on Monday, March 21, 2022 at his residence. He was the husband of Jeannette L. (Frey) Altland, sharing 48 years of marriage. Joseph was born in York on April 13, 1933, son of the late Paul A. and Mary (Martin) Altland. Joseph graduated from West York High School, Class of 1951, and went on to Franklin & Marshall College to earn his BS in Science and Masters in Education degrees. He was a science teacher for Edgar Fahs Smith Middle School and a member of Advent Lutheran Church. Joseph was an avid sports fan, enjoyed golfing, and supporting Penn State football. In addition to his wife, Joseph is survived by his daughter, Stephanie (Altland) Franklin and her husband, Charles, of Jacksonville, FL; son, Blake Altland and his wife, Barbara (Fair) of York; stepdaughter, Carol (Powel) Teter of Cincinnati, OH; nine grandchildren; and four great grandchildren. He was preceded in death by his stepson, Robert T. Powel. A funeral service will be held at 11:00 a.m. on Wednesday, March 30, 2022 at Advent Lutheran Church, 1775 E. Market Street, York, with the Rev. Dr. Constance L. Mentzer, officiating. A viewing will be held before the service from 10:00 to 11:00 a.m. at the church, with a reception immediately following the funeral service, also at the church. The burial will be private at the Mount Zion Cemetery. In lieu of flowers, memorial contributions may be made to Advent Lutheran Church, 1775 E. Market St., York, PA 17402. Arrangements by the Etzweiler Funeral Homes and Cremation Service, 1111 E. Market St., York, PA 17403.

The family of Joseph A. Altland created this Life Tributes page to make it easy to share your memories.

Send flowers to the Altland family.