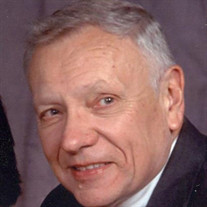 On the 7th day of January, 2021, John Carlton Tverberg, loving husband, father, and grandfather went into life eternal at the age of 87 after a long battle following a stroke. He is much loved and will be greatly missed. John was born on May 11, 1933 in Glasgow, Montana to John and Verna (Barnard) Tverberg. He received his BS in Metallurgical Engineering from the University of Arizona in 1955 as well as his masters in Metallurgical engineering in 1956. On June 14, 1958 he married Dorothy Darlene Hatcher in Richland, WA. They had three children together. Over their 62 years of marriage they lived in Washington, Germany, California, New Jersey, Wisconsin, and Pennsylvania. John had a distinguished career as a Metallurgical Engineer. He possessed three patents, wrote countless technical articles, taught numerous college courses, and contributed to industry standards. Most recently, he operated his own consulting business. John traveled to countless countries and took in many wonders of this world with great relish. He was a voracious reader, and possessed a wealth of knowledge on many topics. He was a man of strong faith and was active in his church. He was known to be quick with a joke, and was almost always smiling. He was preceded in death by his parents, sister Joyce (Tverberg) Coil, and daughter Karis (Tverberg) Bernardo. He is survived by his wife Darlene Tverberg, his sons John Michael Tverberg and Eric (Alicia) Tverberg , son-in-law Jay Bernardo, and their families which include seven grandchildren. A funeral service will be held on Saturday, January 16, 2021 at 11:00 am at St. John Lutheran Church, 2580 Mount Rose Avenue, York with Rev. Tab E. Cosgrove officiating. A viewing will be held from 10:00 am until 11:00 am, Saturday at the church. Burial will be in Susquehanna Memorial Gardens. In lieu of flowers contributions may be made to Wounded Warrior Project, P.O. Box 758516, Topeka, Kansas 66675-8516 Arrangements by the Etzweiler Funeral Homes and Cremation Service, 1111 East Market Street, York, PA 17403.

On the 7th day of January, 2021, John Carlton Tverberg, loving husband, father, and grandfather went into life eternal at the age of 87 after a long battle following a stroke. He is much loved and will be greatly missed. John was born on May... View Obituary & Service Information

The family of John Carlton Tverberg created this Life Tributes page to make it easy to share your memories.

Send flowers to the Tverberg family.