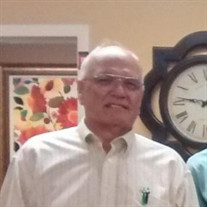 John Douglas Stare, 71, of Spring Grove, died peacefully at home on Monday, December 21, 2020. Born in York on October 25, 1949, he was the son of the late Frank Howard and Elizabeth Pauline (Gentzler) Stare. John was the loving husband of the late Judy Ann (Kopp) Stare, who preceded him in death on July 31, 2004. John retired from Johnson Controls, formally York International, where he worked in the test lab. He was a 1967 graduate of West York High School. John was a member of All Vets USA, the M1 Garand Collectors Club, and the York Rifleman Club. John enjoyed NRA high power shoots, restoring M1 Garand Rifles and hunting and trapping. He was an avid Civil War and WWII buff and liked taking bus trips to many different historical military sites. John enjoyed going out to breakfast with his high school classmates and retirees from Johnson Controls. John is survived by his sons, Vincent D. Stare and his, wife Sherri of Spring Grove and Gregory M. Stare of York; his sisters, Jodi A. Stare of Harrisburg and Connie S. Stare of Dallastown; his mother in law, Mary E. Kopp of York; and his grandchildren, Emili A. Stare and Tyler A. Stare. He was preceded in death by his brother, Bobby Stare. A graveside service for John will be held at 11:00 a.m. on Tuesday, December 29, 2020 at Saint Paul’s Wolf’s Church Cemetery, 4515 Wolfs Church Road, York, with the Rev. Sara Gausmann officiating. Those unable to attend the service in person, are welcome to watch a recording of John’s service on the Etzweiler-Koller Funeral Home website at www.etzweilerfuneralhome.com (the video should be uploaded later in the day Tuesday). In lieu of flowers, contributions in John‘s memory may be made to the Creutzfeldt–Jakob Disease Foundation at www.cjdfoundation.org. Arrangements by the Etzweiler-Koller Funeral Home, 2000 West Market Street, York, PA 17404.

John Douglas Stare, 71, of Spring Grove, died peacefully at home on Monday, December 21, 2020. Born in York on October 25, 1949, he was the son of the late Frank Howard and Elizabeth Pauline (Gentzler) Stare. John was the loving husband of... View Obituary & Service Information

The family of John Douglas Stare created this Life Tributes page to make it easy to share your memories.

Send flowers to the Stare family.