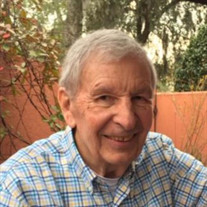 On the morning of August 27, 2020, John A. Shaeffer went home to heaven and was immediately in the presence of his Lord and Savior, Jesus Christ. John was born September 19, 1940 to Agnes (Tyson) & Melville Shaeffer. He graduated from Red Lion High School in 1958. He enjoyed playing baseball beginning in Youth Recreational League and continued to play throughout high school. Another activity John participated in was varsity basketball. Following high school, he was active in Legion baseball and the Susquehanna League. He graduated from Penn State University with an Associate’s degree in Engineering and was later employed by Fincore Electronics for forty-four years. In his spare time, John was an avid hunter and fisherman. He also enjoyed traveling and working around his home. John was a member of Grace Baptist Church, in York where he served as a trustee. John was preceded in death by his parents as well as his older brother, George “Willie” Shaeffer. He leaves behind Julie, his wife of nineteen years, to cherish his life and memory, and Teddy, his constant companion. John is survived by his sons, Mark and wife, Lynn, of Bangor, PA, David and wife, April, of York, PA, and Jeffrey and wife, Julie, of Fredericksburg, VA. In addition, he leaves behind his stepsons, David Landis and wife, Pammie, of Red Lion, PA and Daniel Landis and wife, Jennifer, of Hanover, PA. John is also survived by his twenty-three grandchildren and two great-grandchildren who affectionately referred to him as Pop. There will be a public viewing from 9:00 to 10:30 a.m. on Wednesday, September 2, 2020 at Grace Baptist Church, 3920 East Prospect Road, York. Due to COVID-19 restrictions, the funeral will be a private family service officiated by Rev. Steve Warner. Burial will follow at Lebanon Lutheran Cemetery in Felton, PA. Memorial contributions may be made to Grace Baptist Church Building Fund, 3920 East Prospect Road, York, PA 17406. Arrangements by the Etzweiler Funeral Homes and Cremation Service, 1111 E. Market St., York, PA 17403.

On the morning of August 27, 2020, John A. Shaeffer went home to heaven and was immediately in the presence of his Lord and Savior, Jesus Christ. John was born September 19, 1940 to Agnes (Tyson) & Melville Shaeffer. He graduated from Red Lion... View Obituary & Service Information

The family of John A. Shaeffer created this Life Tributes page to make it easy to share your memories.

Send flowers to the Shaeffer family.