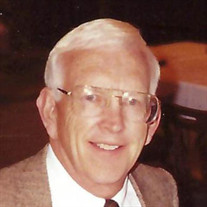 We celebrate that John Philip Moore, 92, of York, PA was called home to Jesus on March 15, 2021 at his home at Country Meadows on Trolley Road. Born on March 13, 1929 in Youngstown, OH, he was the son of the late John and Marion (Kelley) Moore. John was preceded in death by his wife of 56 years, the late Gloria (Vincent) Moore. John is survived by his son, John V. Moore and daughter-in-law, Beth (Jaecklein) Moore of Lake Orion, MI; daughter, Julie Nizinski and son-in-law, Skip Nizinski of York, PA; son-in-law, John G. Achille Esq. of Brookville, PA; 10 grandchildren, Lisa (Moore) and Joseph Jobst of Bradenton, FL; Jason and Monica Moore of State College, PA; Kara (Achille) and Aaron Schmick of Falmouth, ME; Eric Moore of Lake Orion, MI; Megan Achille of Seattle, WA; Shannon Achille of Phoenix, AZ; Allie (Nizinski) and Dennis Alas of Gilbert, AZ; Daniel Nizinski of Plano, TX; Erin Achille of Columbus, OH; and Michael Nizinski of York, PA; and 6 great grandchildren, Johnny, Gloriana, Joey, and Isla Jobst and Vincent and Violet Moore. He was preceded in death by his daughter, Diana Achille, DDS, his parents and his sister. John served in the United States Army from 1951-1953 in the Korean War, mostly in Vienna, Austria. John owned the Brookville Lumber Company for 38 years from 1963-2001. John was a 1947 graduate of Castle Heights Military Academy in Lebanon, TN. He graduated from Kent State University in 1951. John was a devout Christian. He was loving, caring, genuine, and generous. John was a great listener with a sublime sense of humor who loved to wear his brown hat. John will be sorely missed by all who knew him! John enjoyed watching the Steelers and Broadway musicals, and spending time with his beloved family and friends. John was an active member of the First United Methodist Church in Brookville, PA serving on numerous boards and the choir. He was actively involved in Kiwanis for 45 years and served as president; Brookville Chamber of Commerce on Board of Directors for 9 years; Brookville Merchants; Jefferson County Vocational-Technical School on Board of Directors; Jefferson County Area Agency on Aging and served as Vice President for 3 years; and Brookville YMCA on Auxiliary Board. John was awarded the 1989 Business Person of the Year Friends will be received on Wednesday, March 17, 2021 at Good Shepherd Lutheran Church, 2121 Roosevelt Avenue, York, PA from 10:00 a.m. to 12:00 p.m. A private funeral will be held on March 17th at Good Shepherd Lutheran Church, officiated by his son-in-law, Pastor Skip Nizinski. The service will be livestreamed beginning at 1:00 p.m. at https://gsyork.wixsite.com/goodshepherdlutheran. Click on Worship with Us Online. A graveside service will be held at the Brookville Cemetery, Brookville, PA on March 18, 2021 at 1:30 p.m. In lieu of flowers, charitable donations may be made to First United Methodist Church, 205 Jefferson Street, Brookville, PA 15825 or to Good Shepherd Lutheran Church, 2121 Roosevelt Avenue, York, PA 17408. Arrangements by the Etzweiler Funeral Homes and Cremation Service, 1111 E. Market St., York, PA 17403.

We celebrate that John Philip Moore, 92, of York, PA was called home to Jesus on March 15, 2021 at his home at Country Meadows on Trolley Road. Born on March 13, 1929 in Youngstown, OH, he was the son of the late John and Marion (Kelley) Moore.... View Obituary & Service Information

The family of John Philip Moore created this Life Tributes page to make it easy to share your memories.

We celebrate that John Philip Moore, 92, of York, PA was called...

Send flowers to the Moore family.