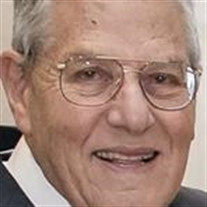 John L. Loth, Ph.D., of Morgantown, WV passed away on May 13, 2022 at the age of 88. He and his wife Harriet recently moved to York, Pennsylvania, to be closer to their daughter, Marianne Babcock. Sons Frank Loth and Eric Loth often visit from their homes in Boston, MA and Charlottesville, VA. John and Harriet were together for 49 wonderful years. Born September 14, 1933, in The Hague, Netherlands, John was the son of the Fina Johanna and Julius Eduard Loth. John’s beloved sister, Julia Johanna Drukker-Loth, passed away in 2018. John received his Bachelor of Science, Master of Science, and Ph.D. in Mechanical Engineering at the University of Toronto, where he was on the boxing team, where he excelled as their heavyweight boxer. He took a position as an Assistant Professor of Aerospace Engineering at the University of Illinois in Champaign-Urbana and then switched to West Virginia University in 1967, where he rose to be Professor of Mechanical and Aerospace Engineering. His research included many ground-breaking discoveries and inventions including the first foam-based solar panel (installed at the top of the WVU Engineering building), the first circulation-controlled flight demonstrator (which flew out of the Morgantown airport) and the first wind turbine with a centrifugal overspeed control (which operated many years at the WVU Apple Orchard). His work was published into over 20 national journal articles and proceedings, that have been since cited by hundreds of other researchers. He also founded two engineering companies and was nationally sought after for his consulting, including as an expert witness on aircraft crash investigations. However, his greatest professional joy was teaching, mentoring, and working with students. This included advising many Design, Build, and Fly teams who competed with great success, and advising his PhD students, who made new technology breakthroughs in aerodynamics and energy systems. He was praised for his research and teaching (winning seven awards at WVU) and was an inaugural member of the College of Engineering Academy of Outstanding Teachers. Because of his love for teaching and advising students, he continued as a professor until the age of 80. When not teaching, John loved being with family and especially his grandchildren. He also loved to fly planes, ride his motorcycle and his bicycle, play squash and tennis, water ski and snow ski, powerboat and sail, scuba dive and snorkel, as well as to build and fix anything and everything mechanical for anyone. A celebration of John’s life will be held this summer in Morgantown, WVA (date and venue to be decided). In lieu of flowers, contributions can be to the 3Z219 – John L. Loth Aerospace Engineering Scholarship fund of West Virginia University. To donate by check, please reference the scholarship name and send to One Waterfront Place, 7th Floor, P.O. Box 1650, Morgantown, WV 26507-1650. To donate by credit card, go to give.wvu.edu, and click on the “Greatest Needs” tab. Then add the fund to the Designation at the top of that page. Arrangements by the Etzweiler Funeral Homes and Cremation Service, 1111 E. Market St. York, PA 17403

John L. Loth, Ph.D., of Morgantown, WV passed away on May 13, 2022 at the age of 88. He and his wife Harriet recently moved to York, Pennsylvania, to be closer to their daughter, Marianne Babcock. Sons Frank Loth and Eric Loth often visit... View Obituary & Service Information

The family of John L. Loth, Ph.D. created this Life Tributes page to make it easy to share your memories.

Send flowers to the Loth family.