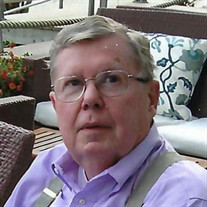 It is with deep sadness that we mourn the death of our beloved husband, father, brother, and uncle, who passed away on August 3, 2021 at St. Anne’s Retirement Community, Lancaster, PA. John L. Finlayson was born on March 14, 1941 to loving parents, John Lawrence and Sarah (Jones) Finlayson, who preceded him in death. He grew up in Merchantville, NJ, where he displayed an early entrepreneurial spirit, captaining a staff of newspaper deliverers and opening his own business, the snack bar at the Woodbine Swim Club. He graduated from Franklin & Marshall College in 1964 with a degree in accounting. He was a proud member of the Phi Kappa Sigma Fraternity and remained a life-long mentor and benefactor to the Zeta Chapter. He worked for both Jenkins, Fetterolf and Co. and Arthur Anderson & Co. as a Certified Public Accountant and served in the New Jersey Army National Guard before joining Susquehanna Pfaltzgraff Co. in 1978 where he had a 28-year career culminating as Chief Financial Officer. He joined Susquehanna Real Estate in 2006 as a partner and remained with them until his retirement. He also had the distinction of serving on several executive boards including The York Water Company, National Central Bank (Hamilton), and Adhesives Research Inc. In addition to his career, John was an active community volunteer with stints on many community boards including the Merchantville Board of Education, the Visiting Nurses Association, York Hospital (for which he was the only non-medical personnel on the accreditation committee), United Way, Junior Achievement, MA & PA Railroad, the South George St. Community Partnership, the Strand Capital, the York Historical Society, the Powder Mill Foundation, York Chamber of Commerce, and the Phi Kappa Sigma national board. A true leader, he served as either president or treasurer for most of these organizations. John was also involved with Crispus Attucks York and served on the Finance Committee of St. Joseph Catholic Church in York. John spent recent years splitting time between Marco Island, Florida and Brant Beach, New Jersey where he enjoyed morning drives, lazy afternoons reading the newspaper, happy hours at Brant Beach Yacht Club, fine dining, and the occasional covert visit to the local candy store. He was also a proud member of the Plate-Turner Club. Along with his parents, John is preceded in death by his sister, Jean, and his two beloved cats, Violet and Claws. He is survived by his loving wife of 49 years, Virginia “Ginger”, his sons John “Jay” (Michele) and James “Thad” (Shoko), his sister Nancy Padgett, his brothers Andrew Finlayson (Sarah) and Bruce Finlayson, his niece Cristin Ryan (Colin) and nephew Colin Padgett, his great nieces Caroline, Emily, and Caitlin, and his sister-in-law Ann Marie. Due to the rising covid numbers, a funeral service will be held for family only. A celebration of life will be held at a later date. John was a passionate advocate for numerous local organizations. In lieu of flowers, he would be honored by any gifts left in his memory to Wellspan VNA Home Care, 540 South George Street, York, PA 17401, MA & PA Railroad Preservation Society, P.O. Box 2262, York, PA 17405-2262, or Crispus Attucks York, 605 S. Duke Street, York, PA 17401. Arrangements by the Etzweiler Funeral Homes and Cremation Service, 1111 E. Market St. York, PA 17403

It is with deep sadness that we mourn the death of our beloved husband, father, brother, and uncle, who passed away on August 3, 2021 at St. Anne&#8217;s Retirement Community, Lancaster, PA. John L. Finlayson was born on March 14, 1941 to loving... View Obituary & Service Information

The family of John L. Finlayson created this Life Tributes page to make it easy to share your memories.

It is with deep sadness that we mourn the death of our beloved...

Send flowers to the Finlayson family.