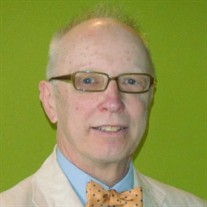 Joel H. Springer, 74, died on Sunday, November 7, 2021 at UPMC Memorial. Joel was born in York on October 7, 1947, son of the late Rev. Henry G. and Ruth N. (Runkle) Springer. Joel graduated from Gettysburg College in 1969 with his Bachelor’s degree in English and went on to earn his Master of Divinity degree in 1973 from the Lutheran Theological Seminary. He co-chaired the 35th, 40th, 45th, and 50th reunions for his graduating Class. From 1973 to 1986 he was a Lutheran minister in York and western Pennsylvania. After returning to York in 1986, Joel worked as a freelance photographer, taught photography at Bradley Academy for Arts and at York College of Pennsylvania. Upon retirement, he became involved in the Yorktowne Craft Guild and served on the Gettysburg Alumni Board of Directors from 2013-2020 and chaired the Outreach Committee from 2015-2021. Joel is survived by his son, Jonathan Paul Springer and his wife, Kristin Reign Springer of West Melbourne, FL; his daughter, Dr. Nora Lynn Springer of Manhattan, KS; his sister, Dr. Suzanne Zeok and her husband, Dr. John Zoek of Raleigh, NC; two nieces and one nephew, Suzanne, Katherine (Katie), and John. Following cremation, a memorial service will be held Saturday, November 13, 2021 at 11:00 a.m. at the Etzweiler Funeral Homes and Cremation Service, 1111 E. Market St., York. A visitation will be held on Saturday from 10:30 to 11:00 a.m. at the funeral home. Burial will be private and at the convenience of the family. In lieu of flowers, memorial gifts may be made to the Joel H. Springer Scholarship Fund online at (www.gettysburg.edu/onlinegiving - list “Joel Springer Scholarship” in designations) or mailed to Advancement Office, Box 423, Gettysburg College, Gettysburg, PA 17325 – checks payable to “Gettysburg College” with “Joel Springer Scholarship” in memo) Arrangements by the Etzweiler Funeral Homes and Cremation Service, 1111 E. Market St., York, PA 17403.

The family of Joel H. Springer created this Life Tributes page to make it easy to share your memories.

Send flowers to the Springer family.