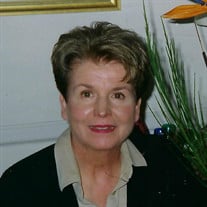 JoAnn S. Paules, 86, of York, died on September 4, 2021, at Country Meadows York South. A funeral service will be held on Monday, September 13, 2021, at 11:00 a.m. at the Etzweiler Funeral Homes and Cremation Service, 1111 East Market Street, York. A viewing will be held Monday from 10:00 a.m. until 11:00 a.m. at the funeral home. Burial will be in New Freedom Cemetery. JoAnn was born in West York on October 27, 1934. She was a 1952 graduate of William Penn Senior High School. She was the wife of the late Dean L. Paules, to whom she was married for 62 years. JoAnn was a member of Westminster Presbyterian Church, Lancaster. She was a founding director of the New Freedom Library. JoAnn served as the head librarian for nearly two decades, for which she received the Distinguished Service Award. In later years she managed the affairs of her husband's portrait business. She is survived by a daughter, Deborah A. Stokkan, and her husband Arnfinn of Sunny Isles Beach, FL; and a brother, Edward Newbould of FL. JoAnn was preceded in death by her parents, Herndon T. Chronister and Ethel L. (Strayer) Newbould, her step-father, C. Henry Newbould, and two sisters, Karen Kehr and Nancy Gemmill. In lieu of flowers, contributions may be made to Westminster Presbyterian Church, 2151 Oregon Pike, Lancaster, PA 17601. Arrangements by the Etzweiler Funeral Homes and Cremation Service, 1111 East Market Street, York, PA 17403.

The family of JoAnn S. Paules created this Life Tributes page to make it easy to share your memories.

Send flowers to the Paules family.