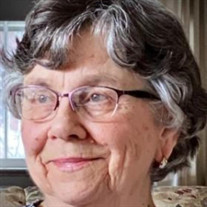 Joann Marie Eckard, 84, entered into rest on Tuesday, June 8, 2021 at her home. She was the wife (for 66 years) of the late Kenneth Levere Eckard, who died on December 22, 2019. Whether it was Mom, Grandma, Grandma Joann, MacMaw Joann or just Joann, for anyone and everyone who knew her, Joann was the epitome of a good and decent person. As the eldest of nine children of the late John G. and Louise (Smith) Lewis and as the Mother of four, Joann was the glue that held her family together. She led by example in her modest way. Intelligent and caring, it was she who her family and friends turned to when in need of a little guidance and support. When asked for advice, be it on a personal matter or just a recipe for her famous sugar cakes, egg custard pie or chicken corn soup (to name a few), she would inevitably start with “Oh, I don’t know” and proceed to offer a cogent, succinct and helpful answer. We are very comforted in our assurance that Joann is at rest with the Lord. She was a long-time member of Temple Baptist Church. In the past several years she attended York Alliance Church and especially enjoyed the bible study group that she was part of. Although she never officially took the Oath, she was truly trustworthy, loyal, helpful, friendly, courteous, kind, obedient, cheerful, thrifty, brave, clean, and most of all reverent toward God – faithful in her religious duties and respectful of the beliefs of others. Joann’s favorite pastimes included gardening (she had a very green thumb), playing Scrabble and other games, and going to the beach with her family. Joann is survived by her children: Kenneth Lee Eckard; and Karen S. (Joe) Wolf, of York; Jennifer L. (Dwight) McKinney, of Buckley, Washington; and daughter-in-law Sarah Hage of North Hollywood, California. Six grandchildren: Jason (Rebecca) Wolf, Adam Wolf, Elliot Eckard, Elizabeth (Josh) Maurer, Katie Malehorn and Brian Malehorn. Five great grandchildren: Malakai Wolf, Waylon Martini, Amelia Maurer, Benjamin Martini and Willow Maurer. Brothers: John Lewis and Stephen Lewis. Sisters: Ruth Hengst and Carolyn Miller and numerous nieces and nephews. Joann was preceded in death by her beloved son, Mark Edwin Eckard; and her brothers, Michael Lewis and David Lewis; and her sisters, Rita Hicks and Susan Plymire. Family and friends are welcome to attend a memorial service in Joann’s honor to be held on Friday, June 18, 2021 at 10:00 AM at York Alliance Church, 501 Rathton Road, York, PA. Interment of her and her late husband’s remains will be private. In lieu of flowers, Joann would wish that you offer a kind word to those you know and to those you don’t. Arrangements by the Etzweiler Funeral Homes and Cremation Service, 1111 East Market Street, York, PA 17403.

Joann Marie Eckard, 84, entered into rest on Tuesday, June 8, 2021 at her home. She was the wife (for 66 years) of the late Kenneth Levere Eckard, who died on December 22, 2019. Whether it was Mom, Grandma, Grandma Joann, MacMaw Joann or... View Obituary & Service Information

The family of Joann Marie Eckard created this Life Tributes page to make it easy to share your memories.

Send flowers to the Eckard family.