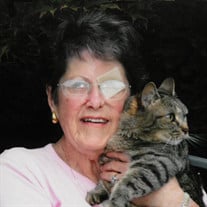 Joan Manette (Kocher) Schildt, 85, died on Saturday, May 8, 2021 at her residence after many years of Alzheimer’s disease. Joan was born in York on August 13, 1935, daughter of the late Ethel M. (Landis) Ness and her husband Carlton, who raised her as his own, and the late Alvin Kocher. Joan graduated from William Penn Senior High School, Class of 1953. She retired from Central York School District as a secretary. She was a member of Mount Zion United Church of Christ. Joan was very artistic, she enjoyed sewing, ceramics, and doing crafts. She was a loving mother, grandmother, and great grandmother. She is survived by two daughters, Aleta Smith and her husband, Dick and Marcie Shindler and her husband, Ronald II “Buzz”; her son, Darren Schildt, all of York; 10 grandchildren; 24 great grandchildren; and four half siblings, Lori Hall, Sandy Hengst, Janelle Warner, and Fred Kocher. She was preceded in death by her son, Howard “Trip” Schildt III; her sister, Alice Ann Flury; and her beloved cats, “Alleys”. A funeral service will be held at the convenience of the family with burial in Prospect Hill Cemetery. In lieu of flowers, memorial contributions may be made to Mount Zion UCC, 1054 Ridgewood Rd, York, PA 17406, American Cancer Society, P.O. Box 22478, Oklahoma City, OK 73123, or to Alzheimer’s Association, P.O. Box 96011, Washington, DC 20090. Arrangements by the Etzweiler Funeral Homes and Cremation Service, 1111 E. Market St., York, PA 17403.

Joan Manette (Kocher) Schildt, 85, died on Saturday, May 8, 2021 at her residence after many years of Alzheimer&#8217;s disease. Joan was born in York on August 13, 1935, daughter of the late Ethel M. (Landis) Ness and her husband Carlton,... View Obituary & Service Information

The family of Joan Manette (Kocher) Schildt created this Life Tributes page to make it easy to share your memories.

Send flowers to the Schildt family.