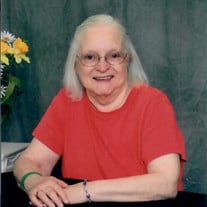 Jeanetta M. (Baughman) Brenner, 94, of York, passed away peacefully at Rest Haven-York with her daughters by her side, on Sunday, October 24, 2021. Born in York on February 1, 1927, she was the daughter of the late Rev. Warren L. Baughman, Sr. and Bessie M. (Spahr) Baughman. She was the wife of the late James A. Brenner, who preceded her in death in 2014. Jeanetta was a 1945 graduate of Altoona High School. She went to work in her early years for Wise Potato Chips in Berwick and later retired from McGregor-Doniger, Inc., also in Berwick, where she worked in the company office. She was a member of The Church of Jesus Christ of Latter-day Saints. She participated in the church’s choir, served as a Sunday School teacher, was a temple worker, and helped the church with their genealogy and computer work. Jeanetta had attended the White Rose Senior Center and was a member of Senior LIFE York. She was a Red Cross volunteer and enjoyed genealogy, knitting, listening to classical music, playing the piano, and watching sports, especially Major League Baseball and Little League Baseball. She will be missed by her fellow residents of The Delphia House apartments, where Jeanetta lived for over 30 years. Jeanetta is survived by her daughters Kay I. Fisher, and her husband Marshall of Lancaster, Susan W. Barnes, and her husband Jeffrey of Carlisle, Jene L. Whitmire of York, and Gail W. Mayes, and her husband Randy of Burnham; her brother Rev. Harold E. Baughman, and his wife Jackie of Surfside Beach, SC; her grandchildren Justin, Becky, Rachel, Tara, and Brandi and her great-grandchildren Isaac, Bentley, Madison, and Ryder. She was preceded in death by her granddaughter Andrea, her twin sister Janet L. Ross, her sister Carrie Baughman, her brother Rev. Warren L. Baughman, Jr., and her stepmother Geneva Baughman. A funeral service will be held at 10:00 a.m. on Wednesday, November 3, 2021 at The Church of Jesus Christ of Latter-day Saints, 2100 Hollywood Drive, York, with Bishop Byron Wilson and Bishop Ryan Mair officiating. Interment will follow in Montoursville Cemetery. A viewing will be held at the church from 9:00 to 10:00 a.m. In lieu of flowers, contributions in Jeanetta’s memory may be made to The Church of Jesus Christ of Latter-day Saints at www.churchofjesuschrist.org or the American Red Cross at www.redcross.org. Arrangements by the Etzweiler Funeral Homes and Cremation Service, 1111 E. Market St., York, PA 17403.

Jeanetta M. (Baughman) Brenner, 94, of York, passed away peacefully at Rest Haven-York with her daughters by her side, on Sunday, October 24, 2021. Born in York on February 1, 1927, she was the daughter of the late Rev. Warren L. Baughman,... View Obituary & Service Information

The family of Jeanetta M. (Baughman) Brenner created this Life Tributes page to make it easy to share your memories.

Send flowers to the Brenner family.