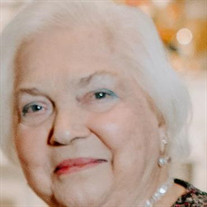 Jean (Hillman) Almirall passed away peacefully on November 9, listening to her favorite musical artist Pete Seeger singing This Land is Your Land, This Land is My Land. Jean was born in 1934, in Richmond Hill, New York. She was the cherished daughter of the late Ann (Matia) and Edward Hillman. She is survived by the beloved children and grandchildren of her first marriage to the late Stephen A. Reidy: David Reidy, of Ft. Lauderdale, FL and his children Jonathan and Michelle; Lauren (Reidy) Scheib, her husband Michael, of York, PA and their children Elizabeth (Scheib) Gotschall and her husband Ryan, of San Diego, CA; M. Patrick Scheib of Miami, FL; and Jack Scheib of St. George’s, Grenada. Jean found love a second time around with her late husband Donald K. Almirall. Through her marriage to Don she enjoyed the privilege of being a step-mother, grandmother and great-grandmother. Left to cherish a very special relationship are Thomas Almirall of, Charlottsville, VA and children John and Marc, and their families; Suzanne (Almirall) Mears and her husband Lenny, of Spotsylvania, VA and children Katie (Goodrich) Pendergrast and her husband Chris; Ryan Goodrich and his wife Heather; Adam Goodrich and his wife Jenny, and their families; Kathleen (Almirall) Patterson and her husband Joe of Roanoke, VA and their daughter Caitlyn; Robert Almirall and his wife Jill of Charleston, SC and children Tayler, Cullen, Megan, and Morgan. Jean also leaves, to cherish her memory, her beloved cousins Audrey Arnold, Steven and Mary Orth, Carol and Tom Jacquith, Tom Orth, Michele Adams, Margaret and Tom Horowitz and their son Nicholas. She also leaves, in flesh but not in spirit, her BFFs Fi George and Judy Coletta, and a host of friends, both old and new, who shared in her life journey. Jean grew up in New York City during the 1930s and 40’s, catching the tail end of the Great Depression and all of World War II. She nurtured a victory garden and learned to live on ration stamps. Nevertheless, she thrived as a student, attending New York City public schools and developing what would become a life-long love of learning. Ever the drama enthusiast her greatest moment at Richmond Hill High School was playing the leading role in the popular play, Junior Miss. She went on to major in education at Queens College where she earned a B.A. degree in 1955. She was proud of her time at Queens College from which she graduated as a member of Phi Beta Kappa. And she liked to point out that as a woman in 1955, for whom an education was under-valued, she never would have received that degree if the New York City College system had not been tuition-free at that time. She went on to earn a master’s degree in education at Hofstra University in 1968. Jean worked as a Learning Disabilities Specialist in Islip Public Schools for 25 years teaching countless children how to read. She retired from teaching for 24 hours. Retirement did not suit her well. So she proceeded to work as an adjunct professor of education at Hofstra, C.W. Post and Dowling college for the next decade and a half. In her downtime she traveled the world from the Great Wall of China to the British Isles, from Europe to Australia, to the scenic National Parks of the United States. She made several trips to South America with the International Reading Association to help train young teachers in remote villages. And she took great joy in bringing back knowledge and trinkets and books from all over the world to her grandchildren. Jean loved the arts and she loved New York City. She was a life-long aficianado of Broadway plays from her very first play Carousel to the very last play she attended, Hamilton. She was overjoyed when her granddaughter chose to attend college in New York City at Fordham and receive her master's degree from Queen's College – and so a perfect day for her was meeting Elizabeth for lunch, shopping and a visit to the Met. When she finally did retire, she found great joy in her folk dancing group, volunteering with the literacy society, and participating in the Born to Read program at South Shore Hospital on Long Island where she delivered books to mothers of newborns. Jean considered ignorance a crime – and she railed against anyone who perpetuated it -- reserving a very special place of disdain for anyone, or anything, that stood in the way of every child’s right to an education. We, her children and grandchildren, will now pick up the torch that spreads light and knowledge and carry it forward. An Endowment Fund has been established at Queens College in the name of Jean Hillman. It will serve to provide financial assistance for New York City public school students who aspire to the profession of teaching. In lieu of flowers, for those who wish to honor Jean, please consider a contribution to the JEAN HILLMAN ENDOWMENT FUND FOR ASPIRING TEACHERS AT QUEENS COLLEGE/CUNY: https://qccommunity.qc.cuny.edu/pages/ways-to-give-pages/jean-hillman-endowment-fund A private ceremony memorializing Jean will be held at a later date at the convenience of the family. Arrangements by the Etzweiler Funeral Homes and Cremation Service, 1111 E. Market St. York, PA 17403.

Jean (Hillman) Almirall passed away peacefully on November 9, listening to her favorite musical artist Pete Seeger singing This Land is Your Land, This Land is My Land. Jean was born in 1934, in Richmond Hill, New York. She was the cherished... View Obituary & Service Information

The family of Jean (Hillman) Almirall created this Life Tributes page to make it easy to share your memories.

Send flowers to the Almirall family.