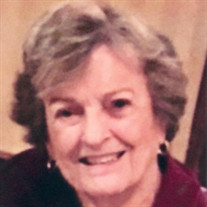 Janice B. Inners, 91, of York, died on April 1, 2021 at Country Meadows York – South. She was the wife of the late Dr. Frederick F. Inners. Born in York on June 12, 1929, she was the daughter of the late Dr. William Ura and Susan (Reidel) Blymire. Janice was a dental hygienist and a homemaker. She was a member of Yorkshire United Methodist Church. She is survived by a son, Edward H. Inners and his wife, Mollye of York; a daughter, Susan I. Brennan and her husband, Terry of Valley Forge; three grandchildren, S. Aubrey Brown, Justin E. Inners and Todd J. Brennan; seven great grandchildren, Wyatt, Quinn and Evelyn Brown; Calvin and Clara Inners and Ella and Tucker Brennan; and a sister, Suzanne Schwendeman of VT. She was preceded in death by a daughter, Kerry A. Inners. A graveside service will be held on Tuesday, April 6, 2021 at 11:00 a.m. at Mount Rose Cemetery, 1502 Mount Rose Avenue, York. Those wishing to attend, please meet at the cemetery entrance at 10:45 AM. In lieu of flowers, contributions may be made to Yorkshire United Methodist Church, 125 Edgewood Road, York, PA 17402. Arrangements by the Etzweiler Funeral Homes and Cremation Service, 1111 East Market Street, York, PA 17403.

The family of Janice B. Inners created this Life Tributes page to make it easy to share your memories.

Send flowers to the Inners family.