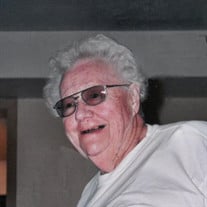 Janet M. H. Geesey, 95, died on Saturday, June 26, 2021 at Pleasant View Retirement Community, Manheim, Lancaster County, where she moved in 2020. Born in York, Janet was the daughter of the late Everitt and Sarah (Hake) Strawbridge. She was the loving wife of Leonard R. Geesey for 27 years until his passing in 1980. A 1943 William Penn Senior High graduate, Janet trained as a draftsman and worked for York Ice Machinery and Bendix Corporations before taking a position with AMF in 1964. She worked for AMF and Harley-Davidson until retiring in 1985. She immediately returned to Harley as a part-time tour guide and retired from the Harley Tour Center in 2014 at the age of 89. She fondly remembered her Harley co-workers and the annual open houses. Janet loved bowling! She started bowling in 1945, and bowled in many national tournaments and served as manager for the York County Women’s Senior tournaments from 1990-2008. She served the York County Women’s Bowling Association as Sergeant-at-Arms, secretary and director from 1960-2007. She was secretary-treasurer of the York County Women’s 600 Club from 1959-2018, and a charter member and former president of the PA State Women’s 600 Club. She was also a charter member and former president of the Quad City 600 Club, formed in 1957. She was a life member of the USBC. Janet was inducted into the York County Women’s Bowling Hall of Fame in 1978 and the PA State Women’s Bowling Hall of Fame in 2008. Janet was a member and former secretary and treasurer of B.P.O.E. #213 Ladies Auxiliary. In her earlier years, she was a member of Trinity Lutheran Church, York. Since 2020, she worshipped with GCC Anywhere, the online congregation of Grace Community Church of Willow Street. Until her last days, Janet had a sharp, inquisitive mind. She fondly recalled memories of her travels in the US and loved to hear about the travels of others. She especially enjoyed summers at the family cottage at Silver Lake. Janet is survived by her nephews and nieces: Pastor Mike Sigman and wife, Jenny, Smoketown, Lancaster Co.; Ronald Geesey and wife, Ellen, Snow Hill, MD; Donna Dinges and husband, Will, York; Brenda Shue, Red Lion; 13 great nieces and nephews and many great-great nieces and nephews. In addition to her parents and husband, she was preceded in death by two nephews: George Geesey, Jr. and Roger Shue. Friends will be received at the Etzweiler Funeral Homes and Cremation Service, 1111 E. Market Street, York, on Saturday, July 3 from 10:00-11:00 am, with a funeral service officiated by Pastor Mike Sigman at 11:00 am. Interment will follow in the Fairview Cemetery, Wrightsville. In lieu of flowers, memorial contributions may be sent to VisionCorps, 244 N. Queen Street, Suite 301, Lancaster, PA 17603, or Grace Community Church Online, 212 Peach Bottom Road, Willow Street, PA 17584. Arrangements by the Etzweiler Funeral Homes and Cremation Service, 1111 E. Market St., York, PA 17403.

Janet M. H. Geesey, 95, died on Saturday, June 26, 2021 at Pleasant View Retirement Community, Manheim, Lancaster County, where she moved in 2020. Born in York, Janet was the daughter of the late Everitt and Sarah (Hake) Strawbridge. She was... View Obituary & Service Information

The family of Janet M. Geesey created this Life Tributes page to make it easy to share your memories.

Send flowers to the Geesey family.