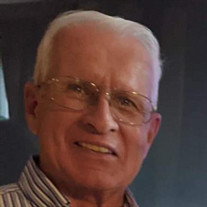 James T. “Jim” Warner, 78, of York, died on September 13, 2021 at York Hospital. He was the husband of the late Barbara A. Warner. Born in York on April 26, 1943, he was the son of the late Dale L. and Etta M. (Smallwood) Warner. Jim was a tool and dye maker, but retired from the United States Postal Service as a driver. He was a member of the Red Lion Bible Church and enjoyed going to auctions and eating out. Jim is survived by a son Steven Warner and his wife Jayne of Seven Valleys, daughter Stephanie Warner of York, daughter Stacy Myers of York, daughter Cathy Gross and her husband Chris of Mt. Wolf; six grandchildren Bracquel Davis, Kayla Weaver, Steven Warner, II, Jessica Hansen, Stefany Mummert and Antwaan Warner; three great grandchildren; a brother Don Warner and his wife Jeanette of Dallastown, and sisters Gloria Oldhouser of Red Lion and Anna Ferree and her husband Brian of Windsor. He was preceded in death by a grandson Tyler Weaver. A funeral service for Jim and Barbara will be held on Friday, September 17, 2021 at 11:30 a.m. at the Red Lion Bible Church, 105 Springvale Road, Red Lion, PA 17356. A viewing will be held Friday from 9:00 a.m. until 11:30 a.m. at the church. Burial will be in Red Lion Cemetery, 108 East Gay Street, Red Lion. Arrangements by the Etzweiler Funeral Homes and Cremation Service, 1111 East Market Street, York, PA 17403.

The family of James T. "Jim" Warner created this Life Tributes page to make it easy to share your memories.

Send flowers to the Warner family.