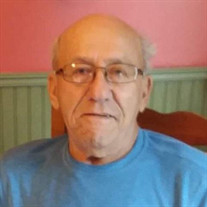 James Edward Mathison, 82, of Thomasville, died peacefully on Friday, January 15, 2021. Born in York on March 4, 1938, he was the son of the late Wilson and Miriam (Emig) Mathison. Jim was married to the love of his life, Lona Louise (Thompson) Mathison, for over 60 years. Jim was a US Army Veteran. Following his time in the service, he owned and operated his own roofing and siding business for many years. He went on to retire from York Wallcoverings, where he worked as a machine operator for many years. Following his retirement, he became a groundskeeper for Honey Run Golf Course. Jim was a member of the Fraternal Order of Eagles, the York Vigilant Fire Company, and the Prince Athletic Association. He was an avid fisherman, always willing to head to any stream, lake, river or sea to cast his rod. He would often spend his Friday nights searching for night crawlers and his Saturday mornings mixing up dough bait. Jim also enjoyed camping, woodworking, riding his lawn tractor around the yard, and especially listing to music and dancing with his Lona. In addition to his wife, Jim is survived by his son, Todd A. Mathison and his companion, Beverly Gross of Dover; his daughter, Justina L. Moses and her husband, Michael of Hanover; and his 6 grandchildren and 11 great-grandchildren. He was the last of his immediate family, having been preceded in death by his 8 brothers and sisters. There will be a visitation for Jim from 5:00 to 7:00 pm on Wednesday, January 20, 2021 at the Etzweiler Funeral Homes and Cremation Service, 1111 East Market Street, York. Military Honors will be provided by the York County Veteran Honor Guard at the funeral home on Wednesday at 6:00 pm. In lieu of flowers, contributions in Jim’s memory may be made to Pennsylvania Wounded Warriors, Inc. at www.pawoundedwarriors.org. Arrangements by the Etzweiler Funeral Homes and Cremation Service, 1111 E. Market St. York, PA 17403

James Edward Mathison, 82, of Thomasville, died peacefully on Friday, January 15, 2021. Born in York on March 4, 1938, he was the son of the late Wilson and Miriam (Emig) Mathison. Jim was married to the love of his life, Lona Louise (Thompson)... View Obituary & Service Information

The family of James Edward Mathison created this Life Tributes page to make it easy to share your memories.

Send flowers to the Mathison family.