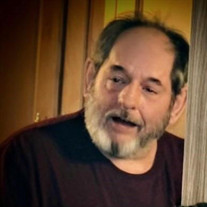 James Richard Fisher, Jr., 63, of Dover Township, died peacefully at home on Tuesday, August 3, 2021. Born in York on March 22, 1958, he was the son of the late James Richard Fisher, Sr. and the late Virginia Rose (Morthland) Fisher. Jim was a machine operator for Stone Container, York Sheet Metal, Carrier and True Temper. He loved to go fishing and hunting, especially from the camp in Adams County. He also loved riding his Harley Davidson motorcycle. Jim could often be found in front of his television watching old western movies, NASCAR, and the Olympics. Above all, Jim loved to spend time with family and friends up on the hill at his log home in Dover Township. Jim is survived by his aunt, Ruthie Cushioner; his uncle, Stewart Fisher; his sister, Marlene Cleveland of Hanover; his sister-in-law, Theresa Fisher; his nephews, Justin E. Fisher and his companion, Michaela Patton of Harrisburg, Christopher L. Fisher of Highspire, and Michael Cleveland of Williamsport; his niece, Melissa Clingan and her husband, Chris of Lancaster; several great-nieces and nephews; and his longtime friends and caregivers from up on the hill, Douglas Hake and Kerry Boyers. He was preceded in death by his brother, Ricky L. Fisher. A visitation for Jim will be held Thursday, August 12, 2021 from 6:00 p.m. to 8:00 p.m. at the Etzweiler Funeral Homes and Cremation Service, 1111 East Market Street, York. In lieu of flowers, contributions in Jim’s memory may be made to the American Diabetes Association at www.diabetes.org. Arrangements by the Etzweiler Funeral Homes and Cremation Service, 1111 E. Market St. York, PA 17403.

The family of James Richard Fisher Jr. created this Life Tributes page to make it easy to share your memories.

Send flowers to the Fisher family.