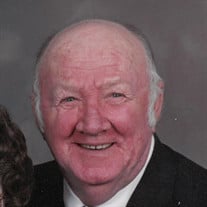 James Coppersmith, age 91, of York, died peacefully at SpiriTrust Lutheran, The Village at Shrewsbury, on Monday, September 20, 2021. Born in Hampstead, MD on September 7, 1930, he was the son of the late Raymond and Myrtle (Stem) Coppersmith. He was the loving husband of the late Dorothy V. (Martin) Coppersmith, who preceded him in death on April 10, 2014. James was the owner/operator of his own mowing and handyman service. Earlier in his career, he worked for the York Federal Paper Box Company. He attended Zion United Methodist Church, York. James enjoyed antiquing and gardening. He loved to go fishing and crabbing, especially with his brothers on the Chesapeake Bay. It was often said about James, “He should have been born on a boat.” Family was always important to him, and he loved time spent with grandchildren, and times spent at the card table and the horseshoe pit at family reunions. James is survived by his children, Debbie Runkle Gunnett, and her husband Jeff Gunnett of York, James W. Coppersmith, and his wife Victoria of Spring Hill, TN, Diane M. Fry, and her husband Norman “Buck” Fry of York, Wayne G. Coppersmith of Marietta, Susan Warner of Hanover, and Robert Coppersmith, and his wife Amy of York, his brother Kenny Coppersmith of Maryland, his sister Esther McComas of Maryland, his 17 grandchildren, 30 great-grandchildren, and 1 great-great-grandson. He was preceded in death by 2 great-grandchildren, 5 sisters, and 5 brothers. A funeral service to celebrate James’s life will be held at 10:30 am on Tuesday, September 28, 2021 at the Etzweiler-Koller Funeral Home, 2000 West Market Street, York, with the Rev. Joshua Rhone officiating. Interment will follow in Greenmount Cemetery. There will be a viewing at the funeral home on Monday evening from 6:00 to 8:00 pm, and again on Tuesday from 10:00 to 10:30 am. In lieu of flowers, contributions in James’ memory may be made to the American Lung Association at www.lung.org or the American Cancer Society at www.cancer.org. Arrangements by the Etzweiler-Koller Funeral Home, 2000 West Market Street, York, PA 17404.

James Coppersmith, age 91, of York, died peacefully at SpiriTrust Lutheran, The Village at Shrewsbury, on Monday, September 20, 2021. Born in Hampstead, MD on September 7, 1930, he was the son of the late Raymond and Myrtle (Stem) Coppersmith.... View Obituary & Service Information

The family of James Coppersmith created this Life Tributes page to make it easy to share your memories.

Send flowers to the Coppersmith family.