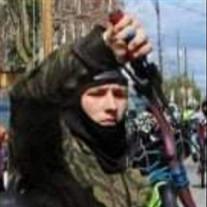 Jaidin M. Altland, 19, of York died December 4, 2021 at York Hospital. Born December 1, 2002 in York, he was the son of Lori (Fitzkee) Altland and Michael Altland both of York. Jaidin was involved with Pedal for Peace, a grassroot youth program that helps the youth of York improve their lives through bike riding. He would help fix bicycles for those that needed this service. He was always there for his many friends. As a kid that was bullied, he developed the strength to continue on in life. His siblings always had his back. Jaidin loved playing video games, spending time with his siblings and nephew, David, and fishing with his father. Jaidin loved life. Jaidin is survived by his mother, Lori Altland and her companion, Blake McBride; his father, Michael Altland; 8 siblings, Michael Morgan, Courtney Altland, Corey Fitzkee (Brittney), Tabatha Altland Scully (Lena), Tamantha Altland, Tucker Altland, Elizabeth Altland, and Aubrey Altland; aunt, Angie Fitzkee; uncle, Robert Fitzkee, Jr.; grandmother, Mary Harris; and many nieces, nephews, and his extended family. He was preceded in death by his brother who he looked up to, Austin Altland who died December 13, 2018; his grandparents, Franklin W. Arnold, Emma L. Arnold, Joan Fitzkee, Robert Fitzkee, Sr., and William Harris and his uncles, Thomas Fitzkee and Franklin W. Arnold, Jr. Funeral services will be held Thursday, December 16, 2021 at 1:00 p.m. at Fourth United Methodist Church, 1067 East Market Street, York with his cousin, Rev. Ronald Knopp officiating. A viewing will be held Thursday from 11:00 a.m. to 1:00 p.m. at the church. A balloon release will be held at the end of the service for those wishing to bring a balloon. Arrangements by the Etzweiler Funeral Homes and Cremation Service, 1111 E. Market St., York, PA 17403.

Jaidin M. Altland, 19, of York died December 4, 2021 at York Hospital. Born December 1, 2002 in York, he was the son of Lori (Fitzkee) Altland and Michael Altland both of York. Jaidin was involved with Pedal for Peace, a grassroot youth program... View Obituary & Service Information

The family of Jaidin M. Altland created this Life Tributes page to make it easy to share your memories.

Send flowers to the Altland family.