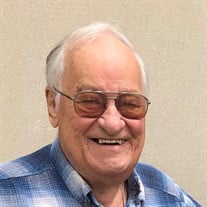 Jacques “Jack” R. Whorl, I, 93, of Emigsville died January 4, 2021 at UPMC-Memorial Hospital. He was the husband of the late Doris Jean (Wolfgang) Whorl. Jack and Doris were married for 64 years prior to her death in 2017. Born June 29, 1927 in York, he was the son of the late Oscar and Anna (Brown) Whorl. Jack served in the U.S. Navy. He was the owner of Jack Whorl Chevrolet in Manchester for many years until he sold the dealership in 2002. Jack was a member of Messiah United Methodist Church. He was a 1945 graduate of North York High School and attended Shippensburg University. He was an avid horseman and loved horse racing. Jack was a 50 year member of York Lodge #266, F.&A.M. He is survived by his 3 daughters, Jill Whorl of Seven Valleys, Jolie Loring of St. Augustine, FL, and Janel Sacarellos and her husband, Themi of York and 10 grandchildren, Okles, Mackie, Leo, Poppi, Sevi, and Arabella Sacarellos and Jackson, Elijah, Jillian and Holden Loring. Jack was preceded in death by a son, Jacques Whorl, II; a sister, Margaret Himmelright; and 5 brothers, Charles, Vernon, Glenn, Elwood, and Jim Whorl. Graveside services will be held Wednesday, January 13, 2021 at 1:00 p.m. at Prospect Hill Cemetery, 700 North George Street, York with Pastor Randy Zeiler, his pastor, officiating. Family and friends planning to attend the service should meet at the Pennsylvania Avenue entrance of the cemetery at 12:45 p.m. on Wednesday. Military services will be conducted by the York County Veterans Honor Guard. A Celebration of Life service will be held in the summer. In lieu of flowers, memorial contributions may be made to Messiah United Methodist Church, 1300 North Beaver Street, York, PA 17404. Arrangements by the Etzweiler Funeral Homes and Cremation Service, 1111 East Market Street, York, PA 17403.

The family of Jacques "Jack" R. Whorl created this Life Tributes page to make it easy to share your memories.

Send flowers to the Whorl family.