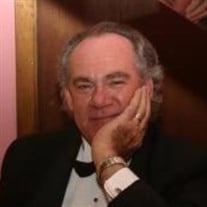 Jack R. Truett, Jr. (often better known as Jackson) ended his earthly endeavors at the home of a very dear friend, Pat Finley, in Mendenhall, Mississippi on June 17, 2021 at the age of 75 years. His memory lives on in three (3) children: a son, Jack R. Truett, III of Franklinton, NC and 2 daughters, Amy Jo Truett of Lancaster, PA and Melissa D. Alexander of Spring, TX, as well as 6 grandchildren and 1 great grandchild; and his 2 sisters of York, PA: Mary Jane Arnold and Janice E. Stitt (and her husband, John, whom Jack loved as a brother), as well as countless other more distant relatives, fellow musicians and automobile aficionados to say nothing of friends and acquaintances drawn to him by his personality and his exceptional skill on the piano keyboard. He was predeceased by his parents and 2 siblings, Gloria J. Hollerbush and John D. Truett. “Jackson” was the first child born to the union of Jack R. Truett, Sr. and Betty J. Feltenberger on April 24, 1946 in York, PA. It did not take long for Jackson to demonstrate his musical skills. By the time he was 5 years old, Jackson was playing the piano like a gifted teenager which led to his invitation to join the band The ConChords, locally, and continuing as a professional with Jay and the Techniques - credit – “Apples Peaches Pumpkin Pie.” He was a proud 1964 York High Bearcat where he marched with the York High band at many functions, but the best high school memory was participating in the Macy’s Day Parade, as well as playing in the Jazz Band – the Serenaders. He looked forward to attending his class reunions and spending time with his childhood friends. While he was tickling the ivories, he found time to tinker with his second talent: acquiring, servicing, repairing, “souping up” and then riding motorcycles and unique automobiles. After wrapping up his participation with the touring “Techniques,” he more or less settled into a schedule of personal appearances as a solo, duo, trio and band leader providing piano music for very appreciative private gatherings first from his home in Jackson, MS and then South Houston, TX where he also developed a process to computer generate the piano music his hands and fingers created until he was almost literally forced out of his home by flood waters from Hurricane Harvey. Jackson loved his music (playing and composing) and the joy it brought to his listeners; he also loved his family – even though significant distance separated them, he communicated with them often; and in his later years, he became fascinated with the Masonic Temple, and his ancestors’ relationship with it. But his everlasting memory will be his music, which, thankfully, will never stop playing. We thank God for his life, but especially for his talents. His sisters will be hosting a celebration of life at Rocky Ridge Park located at 3699 Deininger Rd in East York at the Pin Oak Pavilion on Saturday, August 21, 2021 from 1:00 pm until 4:00 pm. We would love to hear some stories of Jackson’s life from his friends and acquaintances. The Etzweiler-Koller Funeral Home and Cremation Service, York is assisting the family.

Jack R. Truett, Jr. (often better known as Jackson) ended his earthly endeavors at the home of a very dear friend, Pat Finley, in Mendenhall, Mississippi on June 17, 2021 at the age of 75 years. His memory lives on in three (3) children: a... View Obituary & Service Information

The family of Jack R. Truett Jr. created this Life Tributes page to make it easy to share your memories.

Send flowers to the Truett family.