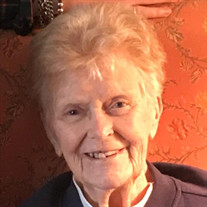 Inez Dieterle Munier, died peacefully Saturday, July 11, 2020, at Normandie Ridge Nursing Home. Born in Philadelphia, PA on August 18, 1923 and raised in Ocean City, NJ, she was the daughter of Corinne McNamee Dieterle and Frederick Joseph Dieterle. Inez was a 1940 graduate of Ocean City High School. Before moving to York in 1950, she lived in New York, Nevada, and Florida. In her 70 years of residence in York, Inez lived in several areas of the community and worked in a number of retail clothing stores. In the late 1970s, Inez opened the Blue Dove Bridal Shop which she owned until she retired in 1991. Inez loved to travel, play bridge, knit, read, and garden. She was an avid fan of the Philadelphia 76ers and Eagles. Inez was preceded in death by two sons, F. Lawrence and Joseph, as well as two sisters, Doris Dieterle, and Lois Broker, and a brother, Frederick J. Dieterle, Jr. She is survived by three nieces, Anne Broker and her husband John Parisi of Washington, DC, Corinne Dieterle of Conshohocken, PA, and Nora Sweet and her husband Jon of Savannah GA. She is also survived by two great nieces, Elizabeth and Corinna Parisi, and four great nephews, Reid and Peter Copeland, and Taylor and Jonathan Sweet. Those planning an expression of sympathy may wish to consider a contribution in Inez’s name to Crispus Attucks, 605 S. Duke St., York, PA 17401. Arrangements by the Etzweiler Funeral Homes and Cremation Service, 1111 E. Market St., York, PA 17403

The family of Inez Dieterle Munier created this Life Tributes page to make it easy to share your memories.

Send flowers to the Munier family.