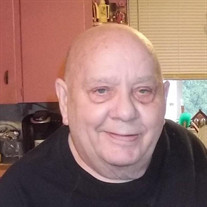 Hiram E. Kindig, 88, of York died Tuesday, November 2, 2021 at UPMC Memorial Hospital. He was the husband of Nancy (Folkenroth) Kindig. Mr. and Mrs. Kindig would have celebrated 68 years of marriage on December 5, 2021. Born January 11, 1933 in York, he was the son of the late Augustus and Dora E. (Kindig) Doll. Hiram retired in 1996 from the York Water Company Filter Plant. He worked for the Water Company for 45 years. He also worked at the YMCA. Hiram was a 1951 graduate of William Penn Senior High School. He was a member of Zion Bible Church in York for over 50 years where he was involved in many different aspects of the church including being an elder, teaching Sunday School, and assisting the Pastor. Hiram devoted his life to the church and extensively studied the Christian faith. He enjoyed listening to Christian music and Yani. He was an avid fan of the Baltimore Colts/Ravens and weightlifting. Above all, family was very important to Hiram. He was a loving husband, father, grandfather, and great grandfather. In addition to his wife, Nancy, he is also survived by his 6 children, Jerry D. Kindig and his wife, Cheryl of Lancaster, Darlene E. Mundy of York, Donna L. Kindig of York, Louann Keezel of Dover, Russell E. Kindig and his wife, Tracey of York and Diana L. Schwartz and her husband, Joe of York Haven; 7 grandchildren, Troy Kindig, Amber Hooper, Nichole Kindig, Tara Green, Shawn Keezel, Kristen Best, and Jessica Keezel; 8 great grandchildren, Amanda, Brittany, Hannah, Aubree, Vivian, Grace, Brynlee, and Alita; and a brother, Henry A. Doll and his wife, Suzanne of York. Hiram was preceded in death by his daughter in 1956, Denise E. Kindig. Funeral services will be held Monday, November 8, 2021 at 11:00 a.m. at the Etzweiler-Koller Funeral Home, 2000 West Market Street, York. Burial will follow funeral service in Mount Rose Cemetery. Viewings will be held Sunday, November 7th from 4:00-6:00 p.m. and Monday, November 8th from 10:00-11:00 a.m. both at the funeral home. Memorial contributions may be made to Zion Bible Church, 1550 N. East Street, York, PA 17406. Arrangements by the Etzweiler-Koller Funeral Home and Cremation Service, 2000 West Market Street, York, PA 17404.

The family of Hiram E. Kindig created this Life Tributes page to make it easy to share your memories.

Send flowers to the Kindig family.