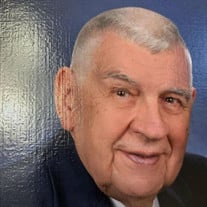 Henry H. Kirkpatrick, Jr., 96, died quietly at home on Christmas morning 2020, shortly after spending two weeks in the isolated COVID-19 care unit established by Country Meadows at its West Shore facility in Mechanicsburg. He was pre-deceased by Carolyn, his wife of over 66 years, in early January 2016. Born in Reading, Kirk was the son of the late Henry H. and Florence Sharp Kirkpatrick. A graduate of Muhlenberg Township High School and of Penn State, he was a member of Sigma Chi fraternity and did post-graduate work in industrial engineering. He is survived by a son, Robert G. Kirkpatrick (Joanne) of White Plains, New York, and a daughter, Susan K. Souser (Craig) of York. He is also survived by five grandchildren, Julia K. Hudson (David) of San Francisco, Timothy Kirkpatrick (Kirstin) of Richmond, Va., William Souser of Seattle, Brian Souser of Los Angeles, and Anne Holly, the daughter of close family friends (William and Bambi Holly). And he leaves three great-grandchildren, Eleanor Hudson, Grant Kirkpatrick, and newly-arrived Halsey Rose Kirkpatrick, born on December 28th. He was predeceased by older brother William S. Kirkpatrick of Reading. Kirk served as a young rifleman in the 84th Infantry Division during World War II and, on Christmas Day 1944, was evacuated from the front lines of the Battle of the Bulge with injuries incurred while on a forward scouting mission. After starting his career in Lancaster, he moved with his young family to York in 1955 to work with York Air Conditioning. He later became a trust officer with the York Bank and ended his working career after decades helping to meet clients’ financial needs with Janney Montgomery Scott. Over the years, he was active in many organizations, including the Rotary Club of York, whose Wednesday lunch meetings were always an important part of his week, and the First Presbyterian Church of York, where he served as an Elder. He was an avid golfer who often combined the game with the travels near and far that he enjoyed with his wife. Internment will be private. A memorial service date will be determined later. Memorial gifts can be directed to the York Rotary Non-Traditional Scholarship Fund, to York College of Pennsylvania, of which he was a loyal supporter, or to the First Presbyterian Church of York. Arrangements by the Etzweiler Funeral Homes and Cremation Service, 1111 E. Market St., York, PA 17403.

The family of Henry H. Kirkpatrick Jr. created this Life Tributes page to make it easy to share your memories.

Send flowers to the Kirkpatrick family.