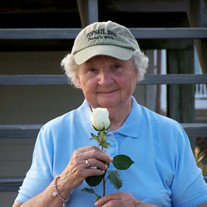 Helena (Lena) Odessa Craumer Baughman, 95, surrounded by her loving family, transitioned peacefully into spirit on May 4, 2021 at Sprit Trust York, the former Lutheran Home. She was a loving wife to Irvin Leroy Baughman for over 70 years, adoring mother to six daughters, Mary Lee, Sally Speir, Ann Griffiths, Sue Baughman, Amy Fry and Beth DuPree. She is preceded in death by her only son Bart B Baughman, her siblings and her parents. Helena was adored as “Nana” to her eight grandchildren, Jennifer Brillhart, Margii Caldwell, Dave Caldwell, Ryan Speir, Christine Ryan, Tom DuPree, Owen Fry, Dean DuPree. Helena has five great grandchildren, Cole Brillhart, James Ryan, Wesley Speir, Alice Ryan and Whitney Speir. Helena was born on June 30, 1925 at her family’s farm in Shrewsbury, southern York County, PA to John and Blanche Craumer. As a child, many chores were part of being raised on a farm. Helena looked after farm animals, tended the vegetable garden and was very busy during harvest periods. This was the start of her strong work ethic, one of her greatest attributes, which she instilled in her children and grandchildren. Helena’s first off farm job was in a sewing factory in New Freedom. These were busy times and days were long as she was still heavily involved with farm work. She saved diligently and was proud to be able to purchase her first car, a 1948 Chevy for $1,865. Helena not only raised her seven children, who were born in a short ten-year span, she worked side by side with Irv building their concrete business, Baughman Construction Company. Helena loved cooking, baking, gardening, animals and playing “500” with her children and grandchildren. Lena and Irv hosted several card clubs over the years as entertaining was a passion for Helena. She had an enthusiasm for travel and visited her daughter Sue seven times in Australia, the last trip at the age of 82. For decades, she would cook Thanksgiving dinner for thirty people and thought nothing of it! Helena lived to be in service to others and worked tirelessly catering after her children left home. She retired from Pfeifer’s catering after 30 years of service in her late 70’s. She always remembered her friends and many shut ins and was constantly “doing” for them. She was happiest when she was in service caring and giving to others. She was a lifelong member of St Marks Lutheran Church and loved singing religious hymns. Helena was able to remember the words to the hymns even during her late stage of Alzheimer’s. Helena’s deep and abiding faith helped her to overcome many adversities and challenges throughout her life. The family will have a private celebration of life, she will be eternally missed and loved by all who were blessed to know her. In lieu of flowers please consider a donation in her memory to The Healing Consciousness Foundation (hcfbucks.org). Arrangements by the Etzweiler Funeral Homes and Cremation Service, 1111 E. Market St. York, PA 17403.

Helena (Lena) Odessa Craumer Baughman, 95, surrounded by her loving family, transitioned peacefully into spirit on May 4, 2021 at Sprit Trust York, the former Lutheran Home. She was a loving wife to Irvin Leroy Baughman for over 70 years, adoring... View Obituary & Service Information

The family of Helena Odessa Baughman created this Life Tributes page to make it easy to share your memories.

Send flowers to the Baughman family.