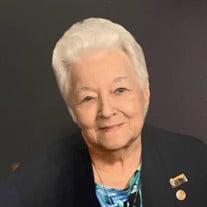 Hattie Louise Lehigh, 86, of York died April 28, 2022 surrounded by her loving family at her residence. She was the wife of Glenn F. Lehigh. Glenn and Hattie celebrated their 68th wedding anniversary on August 14, 2021. Born August 14, 1935 in West York, she was the daughter of the late Martin W. and Glendline (Gillespie) McCauslin. Hattie was a 1953 graduate of William Penn Senior High School. Hattie was a Teacher’s Aide at the elementary schools in the School District of the City of York for many years and served as a Board Member to the School Board. Hattie dedicated her life to not only her family but to any child she met. Volunteering and serving others were her life. She served in many capacities at the local PTA’s in the City Schools. Hattie was the President of the Pennsylvania State PTA from 1984-1986. While serving as President of the State PTA, her theme was “Children-the Rainbows of our future”. She was also an honorary member of the National PTA. Hattie was involved in all of her children’s activities. When she was not volunteering in the school system, she was found helping her Church. She was currently a member of Otterbein United Methodist Church in Emigsville. She was a Sunday School teacher for over 50 years. Hattie was a member of the United Methodist Women where she was a former President of the Central Pennsylvania Conference. Hattie and Glenn were involved with the Refugee Resettlement Committee through the local United Methodist Churches from 1985-2013. During this time, the Committee sponsored 22 families. In addition to her loving husband, Hattie is survived by her 3 children, Jeffrey Lehigh and his wife, Gloria, Kimberly Bair and her husband, Arnold, and Douglas Lehigh and his wife, Theresa all of York, 10 grandchildren, Brady and Dalton Lehigh, Rebecca Cappetta, Jamye Shah, LeAnn Salari, Brandon and Ashley Bair; Kelsie Bivona, Devin Lehigh, and Ryan Werner; 9 great grandchildren; her sister, Judy Werner and her husband, Robert; and her sister-in-law, Mary Fortney. She was preceded in death by her 2 sisters, Betty Guyer and Barbara McCauslin. A Memorial Service will be held Saturday, May 14, 2022 at 11:00 a.m. at Fourth United Methodist Church, 1067 East Market Street, York with the Rev. Richard L. Bowers, her pastor, officiating. A visitation will be held Saturday, May 14th from 9:30 a.m. to 11:00 a.m. A private burial will be held at Susquehanna Memorial Gardens. In lieu of flowers, memorial contributions may be made to Otterbein United Methodist Church, P.O. Box 205, 3225 North George Street, Emigsville, PA 17318 or the York City Dollars for Scholars, Inc., P.O. Box 2261, York, PA 17405. Arrangements by the Etzweiler Funeral Homes and Cremation Service, 1111 East Market Street, York, PA 17403.

Hattie Louise Lehigh, 86, of York died April 28, 2022 surrounded by her loving family at her residence. She was the wife of Glenn F. Lehigh. Glenn and Hattie celebrated their 68th wedding anniversary on August 14, 2021. Born August 14, 1935... View Obituary & Service Information

The family of Hattie Louise Lehigh created this Life Tributes page to make it easy to share your memories.

Send flowers to the Lehigh family.