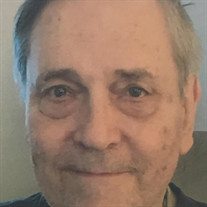 Harry E. “Gene” Faul, 76, died on Wednesday, February 17, 2021 at Country Meadows of York-West. Gene was born in Baltimore, Maryland on February 13, 1945, son of the late Henry E. and Frieda L. Faul. Gene graduated from Baltimore Polytechnic Institute, Class of 1962. Throughout high school he played Varsity Football and Baseball, was a member of Student Advisory Council and National Honor Society, and Vice President of the Student Council. He also received the Albert W. Dowling Award. He then went on to earn his BS in Mechanical Engineering from University of Maryland in 1967. Gene started his career at York International Corporation in 1967 as a Design Engineer and retired in 2005 as the Regional Sales Manager for the Philadelphia Branch. From 2005-2008, he worked at York Corrugating Company as the Sales Manager. Gene was a member of the American Society of Mechanical Engineers and he enjoyed playing golf. He is survived by his daughter, Stacey M. Beaverson of York; son, Michael S. Faul and his wife, Alisa Green of Little River, SC; and two granddaughters, Selena I. Beaverson and Saleen M. Faul. Following cremation, services will be private at the convenience of the family. In lieu of flowers, memorial contributions may be made to the York County SPCA, 3159 Susquehanna Trail North, York, PA 17406. Arrangements by the Etzweiler-Koller Funeral Homes and Cremation Service, 2000 W. Market St., York, PA 17404.

The family of Harry E. "Gene" Faul created this Life Tributes page to make it easy to share your memories.

Send flowers to the Faul family.