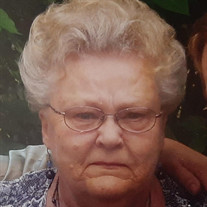 Grace Y. Kucker, age 83, of York, died peacefully at home on Saturday, April 10, 2021. Born in York on August 29, 1937, she was the daughter of the late Florence Guyer. Grace was the loving wife of the late William D. “Bill” Kucker, who preceded her in death on July 22, 2007. Grace worked for many years in the employee cafeteria at Dentsply. She was a member of the Viking Athletic Club and enjoyed bowling. Grace loved to spend time with her family, especially her grandchildren and great-grandchildren. She would often have her family over to her house and cook a great meal for them. Grace is survived by her daughters, Sharon M. Williams and her husband, Willie of York and Susan K. Smallwood and her husband, Bryan. She is also survived by her brother, Robert Lovelace of Akron, OH; her grandchildren, Ashley Marie Mable, Brent E. Smallwood, Wayne R. Stahle, III, and David W. Stahle; and her 7 great-grandchildren. Grace was preceded in death by her beloved son, John Philip Kucker. A funeral service to celebrate Grace’s life will be held at 11:00 a.m. on Friday, April 16, 2021 at the Etzweiler Funeral Home, 1111 East Market Street, York, with Pastor Donald K. Alspaugh officiating. Interment will follow in Prospect Hill Cemetery. There will be a viewing at the funeral home on Friday from 10:00 to 11:00 am. In lieu of flowers, contributions in Grace’s memory may be made to Memorial White Rose Hospice, 1412Sixth Avenue, York, PA 17403 or to the American Cancer Society at www.cancer.org. Arrangements by the Etzweiler Funeral Homes and Cremation Service, 1111 East Market Street, York, PA 17403.

The family of Grace Y. Kucker created this Life Tributes page to make it easy to share your memories.

Send flowers to the Kucker family.