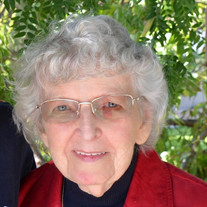 Gloria L. Kissinger, age 90, of Helena, MT, formerly of Rock Creek, ID and York, went home to be with her Lord and Savior on Wednesday, March 3, 2021. Born in York on October 14, 1930, she was the daughter of the late Paul L. and Helen I. (Fauth) Dern. Gloria was the loving wife of H. Philip Kissinger, retired US Army Chaplain. They were married July 9, 1949, for a period of 71 years, a glorious marriage. A loving homemaker and devote Christian, who enjoyed reading, playing board games, and watching cooking shows and “Gun Smoke”. She loved to visit the mountains of the western United States, especially when they were covered in a blanket of snow. She and Phil enjoyed traveling both home and abroad with their missionary service. Occasionally she enjoyed pampering herself by getting her nails done. Family and her Lord where the most important to Gloria. She on occasion traveled to Washington, DC to advocate for her brother, LT Robert Dern USMC, who was missing in action during the Korean War. She cherished times with family and loved to reconnect with family and friends in the York area. At the end of her journey on this earth, Gloria was ready, and anxious to be welcomed Home by her Lord and Savior. Besides her husband, Gloria is survived by her four sons, H. Philip Kissinger, Jr, James P. Kissinger, John D. Kissinger, and David P. Kissinger, and their wives. She is also survived by five living grandchildren, and ten great-grandchildren, one deceased grandson who was a fireman, and is survived by many nieces and nephews, and was the last of her immediate family of ten children. A visitation for Gloria will be held from 10:00 to 11:00 a.m. on Saturday, March 13, 2021 at the Etzweiler-Koller Funeral Home, 2000 West Market Street, York. A service will follow the visitation. Interment in Mount Rose Cemetery will follow the service. In lieu of flowers, contributions in Gloria’s memory may be made to Way of Truth Ministries, 315 40th Street, Altoona, PA 16602. Arrangements by the Etzweiler-Koller Funeral Home and Cremation Service, 2000 W. Market St. York, PA 17404.

The family of Gloria L. Kissinger created this Life Tributes page to make it easy to share your memories.

Send flowers to the Kissinger family.