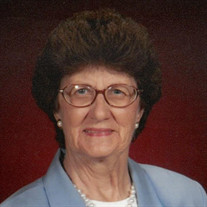 Gloria K. (Hoffman) Keech, 85, passed peacefully on Sunday, February 6, 2022 at UPMC Memorial. She was the wife of Ira R. Keech, sharing 64 years of marriage. Gloria was born in West Manchester Twp. on March 26, 1936, daughter of the late Sterling and Minnie (Williams) Hoffman. Gloria graduated from West York High School where she enjoyed playing volleyball. She worked for Martin Library for 10 years before retiring as a secretary from Dover Area School District. Gloria was a life member of Saint Paul Lutheran Church, Pennsylvania Association of School Retirees, and Heritage Senior Center. She enjoyed cooking and sewing. Gloria loved her family and caring for others. In addition to her husband, Gloria is survived by two sons, Kevin R. Keech of York and his friend, Mary Johnson of Lancaster and Jay S. Keech and his wife, Frances Walker-Keech of York; two grandsons, Justin Keech of Dover and Kyle Keech and his wife, Stausha of Dover; her great granddaughter, Serena Keech; and several nieces and nephews. She was preceded in death by two sisters, Lucille Becker and Hilda Stough; and two brothers, Llewellyn Hoffman and Levere Hoffman. A funeral service will be held at 11:00 a.m. on Thursday, February 10, 2022 at St. Paul Lutheran Church, 250 Trinity Road, York, with her pastors, the Rev. Paul Gausmann and Rev. Sara Gausmann officiating. A visitation will be held on Thursday from 10:00 to 11:00 a.m. at the church. Burial will follow the service in St. Paul’s Wolf’s Church Cemetery. In lieu of flowers, memorial contributions may be made to the (CBVI) Center for the Blind and Visually Impaired or Saint Paul Lutheran Church, 250 Trinity Road, York, PA. 17408. Arrangements by the Etzweiler Funeral Homes and Cremation Service, 1111 E. Market St., York, PA 17403.

The family of Gloria K. (Hoffman) Keech created this Life Tributes page to make it easy to share your memories.

Send flowers to the Keech family.