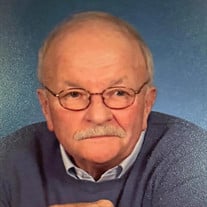 George R. “Jack” Strathmeyer, Jr., 83 of York, PA, died at York Hospital on April 19, 2021. He was the husband of Pamela A. (Myers) Strathmeyer, with whom he observed their 35th wedding anniversary on December 26, 2020. Jack was born August 30, 1937 in York, PA, son of the late Grace (Seacrist) and George R. Strathmeyer, Sr. He was a 1956 graduate of William Penn Senior High School and received a Bachelor degree from Florida Southern College where he was also a member of Sigma Phi Epsilon Fraternity. Jack later received a teaching degree from Millersville University. Jack was a veteran of the U.S.M.C. serving from 1961-1963. He retired in management from the pharmaceutical industries following 35 years of employment. He was a member of Aldersgate United Methodist Church in York, and the Hawk Gunning Club, was an avid golfer and loved his many German Wirehaired Pointers. In addition to his wife, Jack is survived by a son, Jon Kevin Strathmeyer and his wife Karen of York and two grandchildren, Hannah Strathmeyer and Brady Strathmeyer. A graveside service will be held Tuesday, April 27, 2021 at 11:00 a.m. at Prospect Hill Cemetery, 700 North George Street, York, PA with the Rev. Robert E. Brown, officiating. Those attending should meet at the Pennsylvania Ave. entrance to the cemetery by 10:45 a.m. Tuesday. In lieu of flowers, memorial contributions may be made to York County Literacy Council, 1416 Sixth Avenue, York, PA 17403. Arrangements by the Etzweiler Funeral Homes and Cremation Service, 1111 E. Market St. York, PA 17403

The family of George R. "Jack" Strathmeyer created this Life Tributes page to make it easy to share your memories.

Send flowers to the Strathmeyer family.