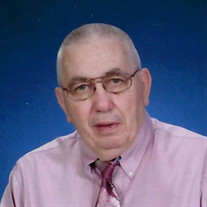 George R. “Bud” Sipes, 82, passed away peacefully at home on Monday, November 16, 2020. He was the husband of Rae S. (Mader) Sipes, whom he married on November 25, 1961. George was born in York on February 18, 1938 to the late George E. and Alverta I. (Shenberger) Sipes. Bud grew up in East Berlin and moved to York when he was in high school. He graduated from William Penn Senior High School in 1956. He joined the Army Reserves. George retired from Metso Minerals in 2001. He was a member of Fourth United Methodist Church. He sang on the choir for many years and was part of the church’s softball and bowling teams. George coached the Bob Hoffman Products girls’ softball team and the York Barbell women’s softball team for many years. He coached men’s softball teams in later years. After retirement, George could be found following his grandchildren’s sporting events or driving around York looking for a sporting event to watch. He was a huge fan of Penn State football, the Baltimore Orioles, and the Philadelphia Eagles. He enjoyed watching the Eagles win the Super Bowl right before his 80th birthday. George always looked forward to family trips to the Outer Banks every summer. Along with his wife of 58 years, George is survived by his two daughters, Pamela Young, wife of Timothy, and Lori Landis, wife of Jere, both of York. He is survived by his five grandchildren, Brett (Kristine), Jamie (Josh), Aubrey (Ben), Karli (Michael), and Drew, as well as, his four great-grandsons, Keegan, Collin, Brogan, and Kamden. Bud is also survived by his brother Delmar Sipes and sisters Faith Smith and Mary Ann Sipes all of York. Funeral services will be held Friday, November 20, 2020 at 11:00 a.m. at Fourth United Methodist Church, 1067 East Market Street, York with the Rev. Matthew Loyer and the Rev. Mitchell M. Galloway officiating. Burial will be in Mount Rose Cemetery. A viewing will be held Friday from 9:30-11:00 a.m. at the church. Memorial contributions may be made to Fourth United Methodist Church, 20 North Lehman Street, York, PA 17403. Arrangements by the Etzweiler Funeral Homes and Cremation Service, 1111 East Market Street, York, PA 17403.

The family of George R. "Bud" Sipes created this Life Tributes page to make it easy to share your memories.

Send flowers to the Sipes family.