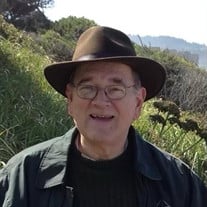 George E. Clarke, Jr., 77, of York, PA, formerly of Baltimore, MD, died peacefully at the York Hospital on Monday, July 5, 2021. Born in Baltimore on June 28, 1944, he was the son of the late George E. Clarke, Sr. and the late Georgia (Messalas) Hess. George was the loving husband and best friend of Emily (Franz) Clarke. George and Emily met at the University of Maryland, where they both attended. They were married at Salem United Methodist Church in Bradshaw, MD in 1966. From the beginning, George’s first concern was providing for his family! He retired from Northrop Grumman, where he worked as an electrical engineer for many years. He was very proud of his children, Andrew, and his wife and five children of Salem, OR, John, and his wife and son of Dallas, TX, Suzanne, and her husband and four children of Fork, MD, and Kate, and her husband and three children of York, PA. George had a life-long love of learning. His hobbies were many and diverse. Among them were shooting on a high-power rifle team at Westinghouse, organic gardening and vegetable growing, and growing vegetables in a cold frame, before it was fashionable. He was an avid reader, did maintenance on all of his vehicles, and taught his children, both boys and girls, the automotive how to’s also. He enjoyed making both wine and ginger beer, and also liked drinking them! His love of photography led him to Cooper’s Camera Mart in Hamilton, MD, where he worked part-time for 20 years! He had his darkroom in the basement, and developed many of the pictures he took. Not only did George have an affinity for photography, he was also into computers. In fact he built a computer from a kit he mail ordered. It was still in the basement when he and Emily moved from their home 45 years later! All kinds of music were a delight to George. Among his favorites were The Eagles, The Beach Boys, and Eric Clapton, but he also enjoyed classical guitar! When it came to television, George loved the History Channel, travel shows, cooking shows, and documentaries, but his first choice was always The Big Bang Theory, he knew each episode by heart and still laughed each time like he was watching it for the first time! Maybe he appreciated The Big Bang Theory so much, because he had a dry sense of humor himself! A life-changing event for George was when he accepted the Lord as his personal Savior and was water Baptized with Emily in 2012 by Pastor Buddy. The other big celebration in his life, was when he and Emily renewed their wedding vows for their 50th anniversary in 2016, with their family and so many friends!! George was a gentle giant with a big heart who loved being at home enjoying the simple pleasures of life! He will surely be missed!! A memorial service to celebrate George’s life will be held at 11:00 a.m. on Thursday, August 12, 2021 at Central Christian Assembly, 7411 Rossville Boulevard, Baltimore (Rosedale), MD 21237. Arrangements by the Etzweiler Funeral Homes and Cremation Service, 1111 East Market Street, York, PA 17403.

The family of George E. Clarke Jr. created this Life Tributes page to make it easy to share your memories.

Send flowers to the Clarke family.