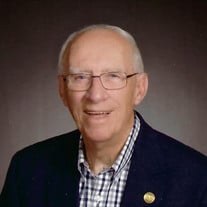 Gene R. Shue, 87, of York died Friday, August 21, 2020 at his home. He was the husband of Norma J. (Rohrbaugh) Shue of York. Mr. and Mrs. Shue celebrated their 65th wedding anniversary on May 29, 2020. Born in York on April 25, 1933, he is the son of the late Charles R. Shue and Dorothy D. (Sponsler) Miller. Gene retired after 42 years as an Industrial Engineer for Standard Register Company. He was a registered Professional Engineer in Pennsylvania and Maryland. Gene was a 1951 graduate of William Penn Senior High School. He received his Bachelor of Science degree in Industrial Engineering with a minor in Foundry Engineering in 1956 from Penn State University and his MBA from Penn State in 1970. He was a member of Alpha Pi Mu Industrial Engineering Honor Society and Tau Kappa Epilson Fraternity. Gene was a member of Saint Paul’s Lutheran Church. He was a former member of the University Club of York and life member of the Penn State Alumni Association. He was a volunteer for the York Area Agency on Aging and the York County Senior Games. Gene was an avid tennis and basketball player and world traveler. He played basketball for York High and in the YMCA Nut League, Church League, and numerous community teams in York County. Gene was a fan of and attended many local and national athletic events, especially sports at Penn State and York College. In addition to his wife, Norma, he is survived by his 2 sons, Michael A. and his wife, Gloria Shue of Merritt Island, FL and Brian L. and his wife, Colleen Shue of North Wales, PA; a daughter, Lynn M. Pentecost of York; 6 grandsons, Chad Shue, Brandon and his wife, Sara Shue, Nicholas Lambert, Patrick Lambert, Kevin Shue, and Kyle Shue; a step granddaughter, Shauni Dusan; a step grandson, Maverick Dusan; a great grandson, Samuel Shue; and a great granddaughter, Olivia Shue. He was preceded in death by a son, Neil E. Shue who died in 1972. A memorial service will be held Thursday, August 27, 2020 at 11:00 a.m. at St. Paul’s Lutheran Church, 25 West Springettsbury Avenue, York with his pastor, the Rev. Stanley D. Reep officiating. Memorial contributions may be made to Hospice and Community Care, 235 Saint Charles Way, Suite 250, York, Pa 17402 or to St. Paul’s Lutheran Church, 25 W. Springettsbury Avenue, York, PA 17403. Arrangements by the Etzweiler Funeral Homes and Cremation Service, 1111 E. Market St. York, PA 17403.

The family of Gene R. Shue created this Life Tributes page to make it easy to share your memories.

Send flowers to the Shue family.