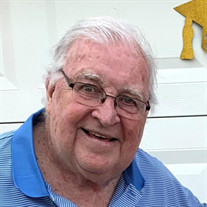 Gene Wayne Alwine, 77, of Hallam died December 31, 2020 at York Hospital. He was the husband of Sharon L. (Engles) Alwine. Born May 22, 1943 in York, he was the son of the late Clarence and Ruth (Bolt) Alwine. Gene was a veteran of the U.S. Army serving during the Vietnam War. He retired from York Tape and Label, now Multi-Color Corporation, after 50 years of employment. Gene was a graduate of William Penn Senior High School. He was a life member of Kreutz Creek Valley VFW Post 7045 and Shiloh American Legion Post 0791. He was also a member of Hawk Gunning Club, Viking Athletic Association, the Fraternal Order of Police, Reliance Club and the Vigilant Social Club. Gene loved to watch his grandchildren play their sports activities, especially his granddaughters play softball. In addition to his wife, he is survived by his daughter, Trica L. and her husband Kevin T. Smith of York; 3 grandchildren, Briana, Emily, and Tyler Smith; a niece, Lori Clark Krebs of York; and 3 nephews, Dennis Clark, Jr. of Dover and Robert and Douglas Engles both of Mount Wolf. Private graveside services will be held at Mount Rose Cemetery. Memorial contributions may be made to Wounded Warrior Project, P.O. Box 758516, Topeka, KS 66675-8516. Arrangements by the Etzweiler Funeral Homes and Cremation Service, 1111 East Market Street, York, PA 17403.

The family of Gene Wayne Alwine created this Life Tributes page to make it easy to share your memories.

Send flowers to the Alwine family.