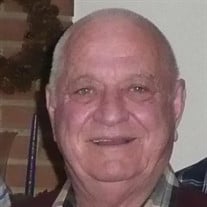 Gary D. Dietz, 84, of York, died on March 2, 2022 at York Hospital. He was the husband of the late Julia A. “Judy” (Moul) Dietz to whom he was married for 59 years until her death in 2018. Born in York on January 16, 1938 and raised in East Prospect, he was the son of the late Edward F. and Ruth P. (Smeltzer) Dietz. Gary worked for Cole Steel and GLC Flooring Distributor, both in York, PA. He was a member of the Shiloh American Legion Post 791 and the 13th Ward Democratic Club. He loved hunting and fishing with his sons. He enjoyed family gatherings and was thankful for the ongoing friendship of his dear neighbors, especially Melissa and Brian who were like family to him. His beloved cat, Chloe, was his constant companion after the death of his wife. He is survived by a daughter, Debra Livingston, (Jeff) of Wrightsville, two sons, Steven Dietz (Susan) of York and Terry Dietz (Michelle) of Dover; and four grandchildren Jason, Kelley, Garrett and Sophia Dietz. He is also survived by his sister-in-law, Jane Dietz and niece, Andrea Birkett (Phil). He was preceded in death by his wife, Julia (Judy), and brother, Stanley. A funeral service will be held on Tuesday, March 8, 2022 at 11:30 am at Mt. Pisgah Trinity United Methodist Church, 5615 Mt Pisgah Rd, York. A viewing will be held from 10:30 am until 11:30 am at the church. Burial will be in Riverview Cemetery. In lieu of flowers, contributions may be made to Pappus House, 253 Cherry Street, York, PA 17402. Arrangements by the Etzweiler Funeral Homes and Cremation Service, 1111 East Market Street, York, PA 17403.

The family of Gary D. Dietz created this Life Tributes page to make it easy to share your memories.

Send flowers to the Dietz family.