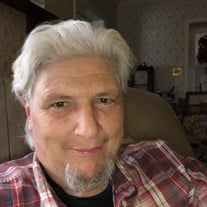 Fred E. Eyster, 68, of York died September 4, 2021 at his sister’s residence after a brief battle with kidney cancer. Born August 21, 1953 in York, he was the son of the late Frederick C. and Rosemary E. (Stambaugh) Eyster. Fred retired in 2016 from York Corrugating Company as a welding supervisor. He was employed there for 43 years prior to his retirement. Fred attended York City Schools until 11th grade and was a 1971 graduate of West York High School. He was a lifelong member of Wolf’s Covenant Church and a member of the West York Memorial VFW Post 8951, the Viking Club, and the Wilson AA/Bombers. Fred’s hobbies included fishing, football, especially Penn State, and being a lifelong antique collector and antique gun collector. He has an extensive collection of rare antiques and was known throughout the York area and New Oxford for his antiques. Family was very important to Fred and he was a caregiver and helper to his parents and extended family. Fred was a special friend to many and his memories will be cherished by all who knew and loved him. Fred is survived by his sister, Martha Gunder and her husband, Craig of Red Lion, his brother, John C. Eyster and his wife, Mel of York; and numerous nieces, nephews, great nieces and nephews, and cousins. In addition to his parents, he was preceded in death by his brother-in-law, Jesse Miranda. Funeral services will be held Friday, September 10, 2021 at 11:00 a.m. at Wolf’s Covenant Church, 4501 Wolf’s Church Road, York, PA with the Rev. Eric Palmquist, officiating. Burial will be in St. Paul’s Wolf’s Church Cemetery. A viewing will be held Friday from 9:30-11:00 a.m. at the church. Masks are optional. Feel free to dress casual and wear your favorite hat in honor of Fred. In lieu of flowers, memorial contributions may be made to the Salvation Army of York, 50 E. King Street, York, PA 17401 or to a charity of your choice. Arrangements by the Etzweiler-Koller Funeral Home and Cremation Service, 2000 W. Market St. York, PA 17404.

Fred E. Eyster, 68, of York died September 4, 2021 at his sister&#8217;s residence after a brief battle with kidney cancer. Born August 21, 1953 in York, he was the son of the late Frederick C. and Rosemary E. (Stambaugh) Eyster. Fred retired... View Obituary & Service Information

The family of Fred E. Eyster created this Life Tributes page to make it easy to share your memories.

Send flowers to the Eyster family.