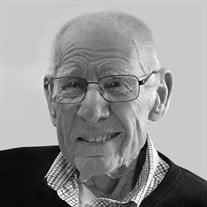 Frank Elwood Dittenhafer, 97, died on Monday, January 11, 2021 at his residence. He was the husband of Sonia M. (Rudisill) Dittenhafer, with whom he shared 29 years of marriage and previously he shared 39 years of marriage with the late Betty L. (Strine) Dittenhafer. Frank was born in Strinestown on October 3, 1923, son of the late Ervin Jacob and Mary B. (Ensminger) Dittenhafer. He was preceded in death by his sister, Ellen Barley; and two brothers, Charles and Paul Dittenhafer. Frank was a 1941 graduate of North York High School. He was a U.S. Navy veteran with six years of service in both Atlantic and Pacific Theaters. He was honorably discharged as an Aviation Machinist Mate First Class. Frank was a Job Cost Coordinator for Stewart & March Inc. Contactors, retiring after 38 years of service. Frank was a member of Dover United Church of Christ and a former member of the church council. He was also a member of the Dover Borough Council and Dover Sewer Authority. He was an avid golfer and former member of Briarwood AARP League, Zembo Golf Club, and Monday “Hackers.” Frank held several Masonic affiliations including, Zeredatha-White Rose Lodge No. 451, F&AM, Zembo Shrine, Harrisburg Consistory 32nd Degree, York County Shrine Club, and York Forest #30 Tall Cedars of Lebanon. He also had memberships at the Shiloh American Legion Post 791, West York VFW Post 8951, Viking Athletic Association, and Hawk Gunning Club. In addition to his wife, he is survived by a son, Frank E. Dittenhafer II and his wife, Sue Ann Kline of York; and his step family, daughter, Jodi Paules and her husband, Robert of Fenwick Isle, DE; son, Stephen Snyder and his wife, Graciela of Argentina; three grandchildren, Braden Paules and his wife, Amber of Williamsport, Breeanne Glatfelter and her husband, Tyler of Yoe, and Hope Klotzer and her husband, Kyle of Canton, MI; and three great grandchildren, Payton and Sydney Paules, and Joey Klotzer. The family would like to extend a special “Thank you” to Hospice and Community Care for the excellent care given to Frank. A private burial will be held at Strinestown Cemetery at the convenience of the family. In lieu of flowers, memorial contributions may be made to Shriners Hospitals for Children, Processing Center, P.O. Box 863765, Orlando, FL 32886. Arrangements by the Etzweiler Funeral Homes and Cremation Service, 1111 E. Market St., York, PA 17403.

The family of Frank Elwood Dittenhafer created this Life Tributes page to make it easy to share your memories.

Send flowers to the Dittenhafer family.