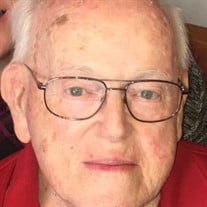 Floyd E. “Matty” Matthews, age 86, of Mount Wolf, died peacefully at home on Tuesday, February 16, 2021. Born in York on December 8, 1934, he was the son of the late Wilson Hamme and the late Phoebe (Hess) Matthew. He was raised by his sister and her husband the late Raymond and Mellie Pressel. Matty was the loving husband of the late Winifred J. “Dolly” (Lehman) Matthews. They were married for 49-1/2 years when she died on March 9, 2007. Matty was a 1952 graduate of William Penn High School, with an industrial focus. Following his graduation, he joined the US Army and served as a cryptographer, and was stationed in Germany. After his discharge, Matty worked for the York Casket Company. He then worked briefly at York Astro, and in 1969 took a leap of faith to help establish Gichner Mobile Systems in Dallastown. He remained at Gichner until he retired in 1999, only to return on a part-time basis for several more years. He was a member of St. Jacob’s United Church of Christ, where he was an active member of the choir. He enjoyed attending Bible studies at Starview United Church of Christ and Bethany United Methodist Church. Matty was an avid golfer and bowler. He played in several golf and bowling leagues in the York area in his younger days. He was a classic car enthusiast and had a ‘67 Corvette, ‘67 Mustang, and a ‘67 Ford Fairlane in his collection over the years. Matty enjoyed cooking and loved to attend farmer’s markets where he created friendships with the vendors. He was an avid Penn State fan, and loved to watch the Nittany Lions take the field. Above all, Matty loved to spend time with his family. His grandchildren were the spark in his eye, and he always had a treat from the farmer’s market for his “grand-puppies”. Matty is survived by his daughters Denise E. Hoffman, and her husband Karl of York, and Michele L. Harper, and her husband Wendell of Dover. He is also survived by his grandchildren Matthew (Matty) Hoffman, Sarah Hoffman, Katie Harper, Lizzy Harper, his brother-in-law Clifford Lehman, and many nieces and nephews. He was preceded in death by his siblings Mellie, Luella, Claudia, Lester, Marrie, Gladys, Leon, Romaine, and Emerson. A viewing for Matty will be held from 4:00 to 6:00 p.m. on Friday, February 19, 2021 at the Etzweiler Funeral Homes and Cremation Service, 1111 East Market Street, York, followed by a private family service. Interment will be in Prospect Hill Cemetery at 10:00 a.m. on Saturday, February 20, 2021 with Military Honors accorded by the York County Veterans Honor Guard. Those wishing to attend the graveside service are asked to gather at the Pennsylvania Avenue entrance to the cemetery by 9:45 a.m. In lieu of flowers, contributions in Matty’s memory may be made to St. Jacob’s United Church of Christ, 100 E. George St. PO Box 111, York New Salem, PA 17371 (please add “building fund” to check memo). Arrangements by the Etzweiler Funeral Homes and Cremation Service, 1111 East Market Street, York, PA 17403.

The family of Floyd E. "Matty" Matthews created this Life Tributes page to make it easy to share your memories.

Send flowers to the Matthews family.