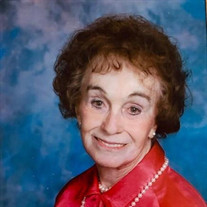 Elizabeth Banks Reilly of York, PA. wife, mother, grandmother, actress, traveler, and wit, dies at 91. In 1987, Beth Reilly of York, PA, was asked on a casting sheet, “Why are you involved in theatre?” Her answer: “my only obsession.” Beth died in her sleep early on the morning of October 22. Beth was truly devoted to theatre. Among the roles she cited as evidence on that casting form: Blanche in A Streetcar Named Desire, Lady Moore in A Man for All Seasons, Grandmama in Gigi. But theatre wasn’t her only passion: She was also devoted to family, travel, social justice, baking, and the City of York, where she lived for the majority of her life. Elizabeth Reilly was born Elizabeth Jane Banks in Ashley, Pennsylvania, the daughter of Ben, an entrepreneur, and Florence, a master gardener and homemaker. Beth attended several local schools, and would have surprised some of her teachers that she later played Mother Miriam Ruth in Agnes of God. She was a little rebellious. Graduating from Wyoming Seminary, she attended Wilson College. Her memories of Wilson included pranks she was never explicit about, a professor who taught her how to chop wood, and backwoods adventures with the Outing Club. Then came a stint working for the Eisenhower campaign and one serving in a neuro-psychiatric Veterans Hospital for three years. The hospital was, she wrote, much like One Flew Over the Cuckoo’s Nest. Taking another job in Philadelphia, she met and married Dr. Charles M. Reilly, and moved to York to raise three children. She worked in the psychiatric area of York Hospital, on faculty at York College and in many positions across 40 years at York Little Theatre including president of the board. Well into her 50s, she achieved a master’s in theatre from Catholic University. Volunteering was important to Beth and she gave her time to the York County Literacy Council and Junior League of York. She also read steadily and traveled widely visiting countries on 5 continents but always with a special eye on Ireland, home to her maternal grandfather, and in many ways, her own heart (it disappointed her late in life to discover her DNA wasn’t as Irish as she had hoped, but she remained enchanted and loyal). She gardened throughout her life, with an emphasis on tomatoes and peppers. In recent years, she lived in the Village at Sprenkle Drive, volunteering at the skilled care and memory support units, founded a croquet team, frequently hosting her children, five grandchildren, and theatre friends, and offering her characteristic wit, homemade muffins, and observations on the world. Beth is survived her husband, Dr. Charles M. Reilly, their three children, Charles B. Reilly, Kate Reilly-Hryshchyshyn and husband, Steve and Marc Reilly and partner, Peg Dohm, and brother, Bernard Banks. She is also missed by five grandchildren, Lydia Hryshchyshyn, Stephen Hryshchyshyn Jr., Alex Hryshchyshyn, Chawin Reilly, and Benja Reilly. There will be a celebration of life in March 2022, please email [email protected] for updates. Arrangements by the Etzweiler Funeral Homes and Cremation Service, 1111 E. Market St., York, PA 17403.

The family of Elizabeth Banks Reilly created this Life Tributes page to make it easy to share your memories.

Send flowers to the Reilly family.