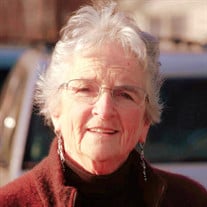 Elisabeth H. “Lisa” Gilbert, 84, of York died February 9, 2022 at her home. She was the wife of the late Ronald Lawrence Gilbert. Lisa and Ron were married for 44 years prior to his death in 2005. Born December 30, 1937 in Philadelphia, she was the daughter of the late Mary Culbreth (Sayre) and Wilmer Worthington Hoopes, III. Lisa graduated in 1959 from Penn State University with a degree in Elementary Education. She married Ron on June 25, 1960, they moved to Ramblewood Farm, and she began teaching elementary school in the York Suburban School District. After starting her family, she moved on to teaching elementary school and art in the Spring Grove School District. Well known in the equestrian community, she and her horse, Tweed Coat, won many awards over the years. There was nothing the two of them couldn’t do well, and the house was filled with ribbons and trophies from their many outings. Lisa was one of the top ladies’ barrel racers on the east coast, and she was also an avid fox hunter, whipping in with the Rose Tree Hunt for many years. She rode hunters, jumpers, western pleasure and western reining, and also competed in Combined Training and in Competitive Trail Rides and Endurance. She even taught Tweed how to drive a cart. In 1971, she became the Riding Director at Camp Susquehannock in Brackney, PA, and for more than 15 years she’d pack up kids, horses, dogs and cats to spend the summers at Camp, with Ron visiting on the weekends. Following her teaching career, Lisa turned to dog obedience training, and she and Ron partnered with some friends to establish the Dog Training Club of York. She ultimately established Ramblewood Dog Training, becoming well known for her help with obedience training. After breeding and showing Shelties and Corgies for many years, she moved on to dog rescue. Always an animal lover, there was never a stray animal that she wasn’t happy to help, no matter the breed. As a result, Ramblewood always had a menagerie of furry friends to greet visitors. Lisa loved to travel. One year she took a sabbatical, loaded half a dozen dogs into her minivan and traveled the United States, coming home with hundreds of photos from her adventure. She and Ron especially loved New Zealand, and the two of them would spend months there, making many life-long friends. After Ron’s death, Lisa continued to make yearly treks there and considered her New Zealand friends her second family. She was a member of Pembroke Welsh Corgi Club of the Potomac for more than 40 years, and for more than 60 years, a member of Asbury United Methodist Church where she was involved in many aspects of the church, especially in the Choir. Lisa is survived by her daughters, Cynthia Sayre Gilbert of Manheim and Elisabeth Gilbert Klenk of York; her son, Daniel Lawrence Gilbert of York; 4 granddaughters, Kathryn Elisabeth Klenk, Megan Elisabeth Gilbert, Julie Garber Smith, and Jessica Garber Dickhaus; four great grandchildren, two sisters, Louise “Dede” Shafer and Priscilla “Biff” Andre, and companion, Chester Guyer. She was preceded in death by her grandson, Andrew Klenk and her brother, Wilmer “Buzz” Worthington Hoopes, IV. A memorial service will be held Friday, February 18, 2022 at 1:30 p.m. at Asbury United Methodist Church, 340 E. Market Street, York with her pastor, the Rev. Mark Terwilliger, officiating. The memorial service will be live streamed for those unable to attend. A visitation will be held Friday from 12:30-1:30 p.m. at the church. Burial will be at the convenience of the family in Susquehanna Memorial Gardens. In lieu of flowers, memorial contributions may be made to Pembroke Welsh Corgi Club of the Potomac, Treasurer, 12241 Sedge Street, Bristow, VA 20136 or to Camp Susquehannock Horseback Riding Fund, 2308 Tripp Lake Rd Brackney, PA 18812 https://susquehannock.com/wp-content/uploads/2019/10/csi-1-Multiple-Ways-to-Give.pdf. Arrangements by the Etzweiler Funeral Homes and Cremation Service, 1111 E. Market St. York, PA 17403.

The family of Elisabeth H. "Lisa" Gilbert created this Life Tributes page to make it easy to share your memories.

Send flowers to the Gilbert family.