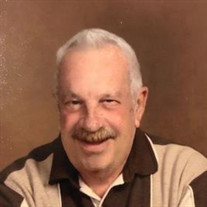 Edward E. Keller, 75, of Wrightsville died September 1, 2020 at Lancaster General Hospital. He was the husband of Lucille (Overmeyer) Keller. Mr. and Mrs. Keller would have celebrated their 50th wedding anniversary on October 17, 2020. Born July 5, 1945 in Columbia, he was the son of the late Paul E. and J. Lucile (Hamilton) Keller. Ed retired from the United States Postal Service after 31 years of employment. He was the Postmaster of Washington Borough and was very instrumental and worked a long time on having the new Post Office built in Washington Borough. After retiring from the Post Office, he worked for the Eastern York School District as a substitute teacher and school security for 10 years. Ed was the Tax Collector for the Wrightsville Borough for 14 years. Ed was a 1964 graduate of Eastern York High School, 1965 graduate of Franklin School of Science and Art in Philadelphia, and earned his Business degree from Elizabethtown College in 1971. He also attended York College from 1968 to 1969. Ed was a member since 1963 with the Wrightsville Steam Fire Engine and Hose Company No. 1. He volunteered for 57 years with the Fire Company serving in numerous positions and held different offices. He was elected in 1974 to be the Fire Chief and also served as the Assistant Fire Chief of the Fire Company. He was a member of the Wrightsville Fire Police Association where he served as a Lieutenant and then became the Fire Police Captain. Ed was a member of the York County Fire Police Association, Pennsylvania Fire Police Association, and the Lancaster County Fireman’s Association. He was a member of Wrightsville Hope United Methodist Church where he served as the Financial Secretary and Treasurer, Administration Board member and President, Boy Scout Charter Organization Representative, and also volunteered at the church’s Food Pantry. He helped bake fastnachts at Trinity Lutheran Church. Ed was a past member of the Wrightsville Rotary Club where he served as President and was a Paul Harris Fellow. Ed was a member of the Riverside Lodge #503, F. & A.M., Lancaster Forest No. 27, Tall Cedars of Lebanon, Harrisburg Consistory and was a 32nd degree Mason. He was a past member of the Loyal Order of the Moose in Columbia. Ed enjoyed spending time with his great grandson, Stephen, and having his morning coffee with the “Coffee Club” at Turkey Hill. In addition to his wife, he is survived by his daughter, Jennifer Sigman of Wrightsville; 2 granddaughters, Megan Gembe and her husband, Jacob of York and Kayla Sigman of Columbia; and his great grandson, Stephen Kissinger. A viewing will be held on Tuesday, September 8, 2020 from 6:00 to 8:00 p.m. at the Etzweiler Funeral Homes and Cremation Service, 700 Hellam Street, Wrightsville. A Masonic Service conducted by his lodge will begin Tuesday at 5:45 p.m. at the funeral home. Due to COVID restrictions, a private family service will be held Wednesday at Wrightsville Hope United Methodist Church. Burial will be in Fairview Cemetery. A funeral procession honoring Ed’s service to Wrightsville will be conducted by the Wrightsville Fire Company to the cemetery. Memorial contributions may be made to Wrightsville Hope United Methodist Church, 404 Hellam Street, Wrightsville, PA 17368, or Hope Food Pantry, 404 Hellam Street, Wrightsville, PA 17368 or to the Ann B. Barshinger Cancer Institute, 2102 Harrisburg Pike, Lancaster, PA 17601. Arrangements by the Etzweiler Funeral Homes and Cremation Service, 700 Hellam St. Wrightsville, PA 17368.

The family of Edward E. Keller created this Life Tributes page to make it easy to share your memories.

Send flowers to the Keller family.